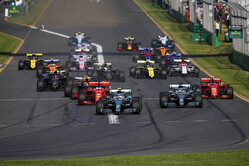 Following today's meeting in London, the ten F1 teams must now ponder whether they agree with the proposals for the future of the sport or not.

The meeting, saw the teams presented with the sport's proposals not only for the technical side of the sport from 2021 but also the governance and financial side, thought by many to be the main obstacle moving forward.

"The day opened with a meeting of the Strategy Group and was followed by a meeting of the F1 Commission, bringing together all of the sport's stakeholders to see how the vision has evolved almost a year on from the presentation F1 made to the FIA and teams in Bahrain last year," said the official F1 site of today's events.

While there was never any intention of a vote on the proposals today, the basic package having been presented to the teams almost exactly a year ago in Bahrain, the matter has to be settled by the June deadline, and will surely be the subject of much discussion in Bahrain this weekend.

While only Mercedes, Ferrari, Red Bull, McLaren, Williams and Renault are members of the Strategy Group, the remaining four teams were allowed to attend as observers, as such issues as the planned budget cap, historic bonuses and a more equal distribution of the prize pot was discussed, along with plans to improve the racing itself.

"Ultimately, F1 wants to create great action and bring the cars closer together, make the drivers the heroes and make the business more sustainable," said the official F1 website.

While there has already been criticism of some aspects of the technical changes that are being considered, it is the financial aspect of the sport's plans that will cause the most division, with the smaller teams seeking a bigger slice of the prize pot along with a budget cap that will help ease the spending war among the big three that has effectively created a two-tier series.

On the other hand, the big teams are unhappy at being told what they can spend and how they can spend it, while also arguing that in terms of their histories and contribution to the sport they are entitled to the bonuses they currently receive and have no intention of relinquishing them, far less being asked to take a smaller slice of the prize pot.

While the sport is hoping that changes to the financial side of the sport will encourage new teams to enter, some of the existing teams are concerned at the growing influence of B-teams, which not only give the big three more power but could also allow them to circumvent certain aspects of the budget cap.

In recent weeks a number of teams, for various reasons, have threatened to quit the sport should things not go the way they want, and it is likely that before June there will be more similar threats.

Meanwhile, Auto Motor und Sport, has revealed Mark Antar's interpretation of the proposed look for the 2021 cars, which suggests a return to the Coke-bottle look that originated in the mid-80s, while also showing a more simplified front wing - similar to the Jordan 191 - as the sports seeks to make the racing closer.