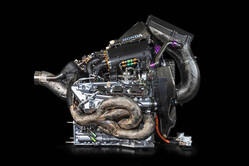 Speaking at the Geneva Motor Show earlier this month, days after revealing that the sport has lost money for the second successive year, Chase Carey revealed that his main targets for the coming season are to make the sport more open and accessible as well as making the wider world more aware of its technical achievements.

Admitting that the sport must build "not just on our technological leadership, but the incredible achievements in efficiency and sustainability for our cars and hybrid engines", he said "we'll continue to invest in opportunities to further reduce carbon emissions and other initiatives to be at the forefront of road relevant technology."

The teams tend to agree that the sport hasn't made the most of its tremendous success in terms of the hybrid formula's efficiency.

"The efficiency of these engines is so understated," admits Christian Horner. "The fuel economy that these engines are achieving is mind-boggling, so actually what Formula One is managing to do, in terms of furthering this technology, is truly impressive and I think it's a message we need to get across more.

"We've all come here on aeroplanes from across the world and been burning fuel at 38,000 feet which is obviously a far bigger carbon footprint than anything that's going on in Melbourne this weekend but I think in terms of the messaging that Formula One is achieving, I think it should be actually praised. The technology that the manufacturers have brought in through these engines and the economy that's now being achieved is quite phenomenal."

"The average efficiency of an internal combustion engine is in the region of 30 per cent to 35 per cent," added Cyril Abiteboul, Renault having been the main driving force behind the introduction of the htbrid formula, even if it has never quite mastered it.

"We are above fifty per cent in Formula One, that's massive," he continues. "If this type of efficiency was affordable for all mass markets products that would be a massive contribution to CO2 emission. So that's something we need to keep at the edge of in future.

"We are talking about e-Fuel, fuel that will not be composed of fossil energy. This type will be a game-changer, I think. We need to make sure that Formula One remains a demonstration for game-changers."

"We need to communicate it better," agreed Mattia Binotto. "What is good is when you see that such technology will be transferred into the automotive industry and certainly our, let me say, turbo technology at the moment is of interest to the entire automotive industry so that again F1 is showing on the edge of technology and in this case really pushing the message so it's down to us really to explain it and make sure it's happening."

"I've read, most recently, that the 15 largest container ships burn or have as much emission as 760 million cars," said Toto Wolff, "and the plastic that ends up in the seas is a phenomenon that we can even see in Europe every summer and I think these things need to be tackled and when we look into our micro-cosmos it's like Christian and Mattia said, those engines have all the energy recovery that you can find in the most modern road cars.

"We have battery technology, we have energy recovery through various systems and they have become more and more efficient and they are very much at the forefront of technology that eventually ends up in road cars and each of us has the duty, be it in our little small world, of not using plastic bottles any more or looking after our own environment and in the same way as the guys being involved in Formula One, making sure the right message is transported into the world, that these engines are the most efficient and the most green engines that have ever existed."