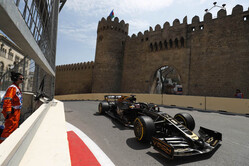 In Q2, delayed at the start after an accident by Robert Kubica of Williams at the end of Q1 and further red-flagged after Charles Leclerc of Scuderia Ferrari crashed midway through the session, Magnussen earned the 14th-fastest time with a lap of 1:42.699, ending his streak of three consecutive races in which he made the top-10 cutoff to advance to Q3.

Romain Grosjean: "It's been complicated since the beginning of the weekend to be fair. The feeling in the car is not quite there. It got better in qualifying, we did a good job, so I was quite shocked to see the lap time, and what was missing, first to get into Q2, and then against my teammate. We need to analyze everything, as this hasn't been our best weekend so far. We haven't generated the grip, so there's still more work to be done there. The qualifying feeling was okay, so I'm just surprised to be that far off."

Kevin Magnussen: "Obviously it wasn't the best qualifying for us - just not really fast enough today. It wasn't a perfect Q2 either. I was overtaken just before the last corner to start the lap, so I was right behind the Renault and in its dirty air, I locked up unfortunately. I didn't get a last go at setting a time. I needed a lot of lap time from that lap, but I don't think it was really there. It's slightly disappointing, but hopefully, well - the first two races we've been good in qualifying, then not so good in the races, hopefully it's the other way around this weekend."

Guenther Steiner: "An exciting day I'd say, but not in the right direction. We came here knowing that this track would not suit us, but we tried to do our best. Romain (Grosjean) just didn't quite get a feeling in the car, so went out in Q1, and Kevin (Magnussen) got a little bit further reaching Q2. It's one of the tracks where I'm slightly less worried starting in our positions, it's a complete lottery here with what happens in the race. It doesn't mean we're staying out of trouble. You never know what can happen. Last year we started last with Romain and worked our way up to fifth - until we had a crash. So, anything is possible here, and we're not giving up on points. We look forward to tomorrow."