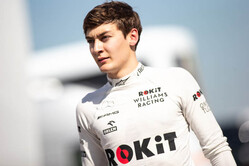 After an intense winter, the 2019 FIA Formula One World Championship is officially about to get underway! The season kicks off this weekend at Australia's Melbourne Grand Prix Circuit with ROKiT Williams Racing heading into 2019 with a new look, a new driver line-up, and renewed energy.

Robert Kubica has stepped up into a full-time race seat having served as the team's Reserve Driver last year, and the Pole will complete a remarkable return to the grid after an eight-year absence on race day down under. He is accompanied by young British talent and current FIA Formula 2 Champion George Russell, who begins his Formula One career by making his debut in Melbourne.

Dave Robson, Senior Race Engineer: Melbourne is a fantastic location for the first race of the new season and it will be great to get into a warmer climate following winter testing in Europe. It is an exciting season ahead with the effect of the new rules in aerodynamics, which we hope will deliver not only closer racing but also a closer grid. For us, it has taken a huge amount of work by everyone on Grove to prepare enough parts, to get all our procedures in place, and ensure that the drivers are in the best possible position to start the competition. The first race is always one of the most interesting as we see the real order of performance for the first time. In terms of the circuit itself, it is quite an unusual track where it can be quite bumpy, and tough on the brakes. It places a lot of demands on the car's handling as well as the drivers' stamina but also requires a lot of the aerodynamics, with the exciting high-speed chicane at T11/12 being especially demanding. It is a good test of both the drivers and the cars, but it can throw up some unusual results. Finally, we wish all our fans a great start to the season.

Robert Kubica: It will be a very emotional Grand Prix. It is the second debut for me after being away from the sport for many years. My last Formula One race was in Abu Dhabi 2010, so I am looking forward to going to Australia with a few things to cover and learn. I hope to enjoy the weekend and that everything will run smoothly without any big issues so I can concentrate on my driving and discover a new Formula One. It is one thing to drive a Formula One car, and it is another thing to actually race it. Over the years, I think the approach to races has changed, so I have a lot of things to discover but I am looking forward to it.

George Russell: I am extremely excited for Melbourne. It will be my first race in Formula One and it is a dream come true. It will be a very proud and extremely surreal moment for me standing on the starting grid with everybody preparing for the race, and I am really looking forward to the whole experience. I am going to make sure that I enjoy it, won't take it for granted and make the most of it. I have never been to Australia before, so I am going out there earlier to get used to the weather, the time difference and see the city a little bit before starting work properly on the Tuesday before the race. All in all I am really looking forward to the whole experience.