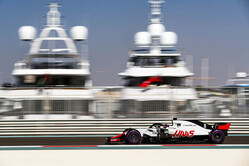 The final round of the 2018 FIA Formula One World Championship began with practice Friday at Yas Marina Circuit in Abu Dhabi as teams prepared for the season-ending Abu Dhabi Grand Prix Sunday.

While the top speeds are high, the track's array of corners forces teams to compromise on their cars' setup, employing medium levels of downforce. The layout emphasizes traction and braking and, with the Yas Marina surface being relatively smooth, Pirelli's softest tire compounds are used since the demand on tires is minimal in comparison to other circuits. This means a return to the Pink hypersoft tire - the grippiest compound in Pirelli's lineup - which actually debuted at Abu Dhabi last year during testing following the grand prix.

Both Grosjean and Magnussen began FP1 on the Purple ultrasoft tire before transitioning to the Pink hypersofts, commenting rear grip was a challenge on the initial compound but the overall balance of their racecars improved considerably on the latter compound. Magnussen's quick time of 1:40.235 came on his 13th lap shod on hypersofts. He ran 21 laps and was the sixth-fastest driver. Grosjean's best time was a 1:40.663 on his 15th lap, also set on hypersofts. He ran 24 laps and posted the 10th-quickest time.

As day turned to night in FP2, speeds picked up and lap times dropped. Grosjean wrapped FP2 as the seventh-quickest driver with a time of 1:38.060, which was 2.603 seconds better than his best lap in FP1. His quick time came on the 11th of his 30 laps on a set of hypersofts, which he called "quite resilient." Magnussen shaved 1.917 seconds off his FP1 time with a lap of 1:38.318 to finish the session ninth fastest. His fast lap came on his 13th tour, also while utilizing the hypersoft tire after switching from ultrasofts. He also completed 30 laps.

Romain Grosjean: "It was a pretty good Friday. I think it was a good improvement from the afternoon into the evening. I was pretty happy with the way the evening session went, which is most important for the weekend, so that was quite positive. FP1 and FP3 aren't representative, whereas FP2 is, so I'm glad the car worked well there. We have a few things to look into to make sure we get the best of the car tomorrow and prepare for the race the best way we can. Generally, we're happy with where we are."

Kevin Magnussen: "I guess it was a pretty good Friday. It's always tricky here with FP1 in bright daylight and the track being so hot, then for FP2 it cools down a lot in the evening. It's not that easy to learn too much between the two sessions because of the temperature difference. The car seemed to be OK in both sessions, so that's good news. It's more the long run on the hypersoft tire, which was the tricky one. It's difficult to make those tires last more than five laps. The front tires take a big hit. Overall though, I'm happy about how today went."

Guenther Steiner: "Practice went pretty well today. We didn't have any big issues. We successfully ran through all of our programs. Let's hope we continue on that path in qualifying tomorrow and have a good final race on Sunday."