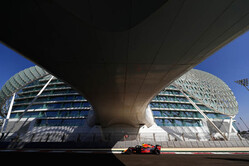 There are just two reserve drivers on duty this morning, Antonio Giovinazzi at Sauber, while at Williams Robert Kubica is in Sergey Sirotkin's car, as he will be next season.

While Fernando Alonso's car is running a special livery to mark his 'final' F1 appearance, for reasons best known to itself, Lewis Hamilton's car is running the number '1' instead of the usual '44'.

The lights go green and Raikkonen is first out, followed by Ericsson, Vandoorne and Kubica.

As more drivers head out there is a mixture of hypers, ultras and even supersofts.

Verstappen is running a 'garden gate' sensor on the left-rear of the Red Bull.

Just five minutes into the session all twenty drivers have made an appearance, and for the most part promptly returned to base, though a couple of drivers stay out for a second lap. Raikkonen, on the other hand, completes three.

Vandoorne is the first driver to appear for a second run, the hypersoft shod McLaren driver looking set to post the first time of the weekend before pitting.

As Pirelli points out, this session isn't representative of qualifying and the race as it's held in the heat of the day.

A sign of the times, as Bottas is told he'll need to relearn the gears again as the car has been reprogrammed. The Finn subsequently posts the first time of the weekend, a 1:55.540. Moments later Sainz posts 42.586.

More and drivers head out, and as Vettel posts a 41.135, the cameras pick up on Sainz taking a rough ride over the new 'sausage' kerb at T21.

Hamilton's first flying lap sees the Briton go top with a 39.675, ahead of Vettel, Sainz, Magnussen, Hartley, Gasly and Grosjean.

Ricciardo's first lap sees the Red Bull driver split the Mercedes pair with a 39.757, with teammate Verstappen posting 39.961 to go fourth moments later. All four are on the hypers.

While the top four are covered by 0.385s, fifth placed Raikkonen is a further 0.6s behind.

Having gone quickest in S2, Bottas has to abort the lap after finding himself behind a slow Giovinazzi.

At the 40 minute mark, when the extra set of tyres have to be handed back, it's: Verstappen, Hamilton, Ricciardo, Bottas, Raikkonen, Vettel, Ocon, Perez, Sainz and Giovinazzi.

Verstappen complains of rear locking under engine braking, and when told this is doubtful he laughs and replies: "I'm pretty sure it's that."

Elsewhere, Hartley asks if he has time to jump out of his car and take a pee - he's in the garage by the way - while Raikkonen is confused as to whether he should follow the commands of the green light or 'the hand'.

Kubica already making an impact as he recommends a couple of ideas which the team says it will try.

The Mercedes pair head out again, Hamilton on ultras and Bottas on supers.

Both drivers encounter traffic however, and on their opening laps fail to improve.

Next time around however Bottas goes quickest in S1, before losing time in S2. Struggling for grip he subsequently aborts the lap.

As Sainz goes seventh (40.588), there are no such problems for Verstappen who posts a PB in S1 before going quickest in S2. Another purple in S3 sees the Dutchman stop the clock at 38.491, over a second quicker than Hamilton.

"The track feels really bad, or perhaps it's the car, there's just no grip," complains Hamilton.

Replay shows Verstappen having a moment as he went for a second flying lap, the Dutchman doing well to catch the car as it snapped out in T6.

"Anything I can do to protect the rears, because they're overheating really bad," asks Vandoorne. The Belgian is given a list of instructions.

"It's still not good by the way," says Verstappen of his engine braking issue.

"It's quite an unhappy car at the moment," reveals Hamilton.

On the hypers, Ocon improves to fifth with a 40.102, this being the Frenchman's final Grand Prix for the foreseeable future. The Force India expresses concern that someone might get a puncture on what he believes is loose concrete on one of the corners, referring to the new 'sausage' kerb.

Raikkonen complains of a vibration in Turns 8 and 9.

Alonso calls on his vast experience as he experiences a snap of oversteer in T20, the McLaren running wide in the process.

Ferrari follows Bottas' example and switches to the supersofts, both driver currently 1.9s off the pace.

Though down in last place, 4.5s off the pace, Kubica has completed 21 laps, only Bottas (23) having completed more. The Pole is understood to be carrying out aero tests with high fuel. Alonso (13) has completed the least.

Sainz is warned that the kerb at the exit of T20 is breaking up. Sounds like a job for Charlie Whiting between the sessions.

Shortly after his warning, Sainz has a spin at T18, while Gasly heads into his garage with smoke billowing from the rear of his car.

"The front-right is massively giving up now," warns Verstappen.