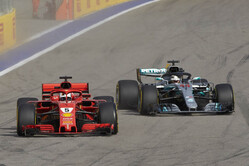 Despite the rhetoric, it will be mid-March, St Patrick's Day, at Albert Park in Melbourne when we get the first hint of whether the new rules actually work or not, with further clues in Bahrain and China.

F1 technical boss Ross Brawn insists that the aero rules being introduced for next season will improve the racing by dint of making following the car ahead a little easier, thereby opening up the possibility of overtaking.

"We saw in Brazil that when the performance level of two cars are more or less the same, overtaking is almost impossible," said the Briton. "That raises the question as to how to make it easier to make a move on the car in front.

"During 2018, we have made significant progress in defining next year's technical regulations," her continued, "especially regarding the key area that is the front wing and in the last few weeks, we have worked out the fine details. Our simulation work, and from what the teams with which we have worked closely on this tell us, the effects are tangible, even though we are well aware that the real proof will only come next March.

"The changes introduced are a first important step, but not necessarily an exhaustive one," he adds, by way of a caveat, "towards defining the new technical and sporting regulations that will shape the long-term future of Formula 1. It's a foretaste of what we are defining for 2021 and we are pleased with what we have already achieved for 2019, but clearly we have high hopes, even in the short term.

"This year, Formula 1 has produced some really exciting racing, I'm thinking immediately of Baku, Shanghai, Silverstone and Mexico City and there is every sign that there will be more of the same next year."

"It was a significant step backwards," said Force India's Otmar Szafnauer, when asked in Mexico to compare the difference to this year's aero rules having tried a prototype 2019 front wing in the post-Hungary GP teat. "We've got aggressive targets, I don't know if we will be able to hit them. We're trying to predict the future as to what we can find, but yeah, it was a massive step back for us."

"The same for us," added Toro Rosso's Franz Tost. "I discussed it with the people in the wind tunnel and as it looks currently they do not believe that overtaking will become much easier, which means there is less dirty air behind the car. Therefore I'm not sure that this regulation change will end up where we expect - that overtaking will become much easier. I think that at the beginning of next season the teams will have reached a similar level on downforce as nowadays."

In Brazil, the mood was pretty similar.

"I think the concept that the FIA have put forward to try and improve the wake to the following car is the right thing," said Renault's Nick Chester. "Obviously in one year you couldn't do all of the changes that are planned eventually for 2021.

"From what we've seen so far I think it'll make a small difference," he admitted. "It'll go in the right direction, so the following will be a little bit improved - but we're probably going to have to wait until 2021 to see what the full package can deliver."

"On the face of it, it is going in the right direction," said Jock Clear. "I think we're all a little bit tentative about exactly what it's going to look like and that is the fact of the matter.

"We're going to have to wait until next year to actually see what the implications are - because of course ten teams will come up with ten solutions, some of which we won't even have thought about and then that may well move the goalposts slightly.

"I think we are attacking the right areas," he admitted. "We are looking at the fact that close racing doesn't necessarily mean everybody can overtake easily - but it does mean that cars can follow each-other and they can pressure each other - and I think that's the thing we're targeting. Just allowing cars to maybe be close battling in the future."

"I think Nik Tombazis summed it up quite well..." said Rob Smedley. "I read an article last week and I think he said you'll never get a Formula One car - which is essentially an aerodynamic formula - following like a touring car. It just won't happen. Physics won't allow that to happen. So you have to accept that cars are difficult to follow - especially with this generation of cars and the amount of downforce that they generate.

"So, it will be a little bit better, it will go in the right direction but we'll all iterate to solutions to get us back to where we are in about six months."