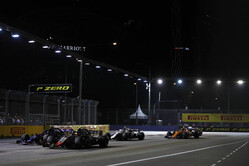 Haas F1 Team drivers Romain Grosjean and Kevin Magnussen finished 15th and 18th, respectively, in the Singapore Grand Prix Sunday at Marina Bay Street Circuit. The longest race in the 2018 FIA Formula One World Championship proved arduous for the American squad, as its two drivers endured the 61-lap contest around the 5.063-kilometer (3.146-mile), 23-turn track with no points to show for their efforts.

There was a silver lining, however, as Magnussen, in his 75th career Formula One start, set the fastest lap of the race - a 1:41.905 on lap 50. It was the first time Magnussen has achieved this accolade in a career dating back to 2014.

After qualifying among the top-10 for the eighth straight time, Grosjean started on the Pirelli P Zero Pink hypersoft tire, as all those who advanced to the final round of knockout qualifying must start the race on the tire they used in qualifying. Magnussen was free to choose his tire compound to start the race, and he opted for the Purple ultrasoft.

Tire degradation was a key component of the Singapore Grand Prix, with the hypersoft delivering the most speed, but only for a short period of time before becoming too worn to bring any more performance. The Yellow soft - the hardest tire of the three compounds Pirelli brought to Singapore - had almost no degradation. The ultrasoft served as the happy medium between the hypersoft and soft.

Grosjean held steady in eighth place for the race's first 15 laps, pitting for new Yellow softs on lap 16. This dropped him to 18th.

Magnussen, meanwhile, stayed out until lap 26, where he pitted and joined his teammate on Yellow softs. By staying out longer, Magnussen was able to climb to 12th before the pit stop sent him back to 19th.

By the halfway mark of the race, Grosjean was 16th and Magnussen was 19th, and with varying pit strategies in place by other teams up and down the pit lane, there was still hope forward progress could be made.

The Haas F1 Team drivers didn't let strategy alone dictate their outcome. Magnussen had a spirited battle with the Toro Rosso of Brendon Hartley, first on lap 36 and again on lap 43. Grosjean fought with the Williams of Sergey Sirotkin on lap 37, ultimately grabbing 14th, but while also incurring a five-second penalty for not heeding the blue move-over flags as race leader Lewis Hamilton was right behind Grosjean as he raced wheel to wheel with Sirotkin.

Magnussen, mired in 18th, pitted again on lap 36, swapping his soft tires for hypersofts. This dropped him to 19th, but Magnussen quickly earned the spot back when Force India's Sergio Perez had to serve a drive-through penalty, allowing Magnussen to get by.

Magnussen soon had Hartley in his sights again, and he picked off the Toro Rosso driver on lap 43 with a decisive move off turn one. It was all for naught, however, as Magnussen needed to make a third pit stop on lap 48 for another set of hypersofts.

But the fresh rubber combined with a light fuel load and clean air did allow Magnussen to turn the race's quickest lap shortly after returning to the track.

Despite being fast, Magnussen was stuck in 18th, as the gap to 17th-place Hartley was too much to overcome. Grosjean crossed the stripe in 13th, but once his five-second time penalty was assessed, he fell to 15th.

Fifteen rounds into the 21-race Formula One schedule, Haas F1 Team remains fifth in the constructors' standings with 76 points, 15 points behind fourth-place Renault with an 18-point advantage over sixth-place McLaren. Magnussen is ninth in the driver's championship with 49 points and Grosjean is 14th with 27 points.

Six races remain, with the next event being the Russian Grand Prix Sept. 30 at Sochi Autodrom.

Romain Grosjean: "I think it was a frustrating race for everyone who qualified between seventh and 10th on the hypersofts. It was such a poor tire in the race. We did 10 laps and they completely went, while the ultrasofts did, I don't know how many laps, 40? So, it's almost better not to qualify in the top-10. Maybe we need to think about that a little bit because I felt like I pushed really hard in qualifying and in the race every single lap. I did the best I could but, in the end, I had no chance of being in the top-10. I'm sorry if I blocked anyone, it was not my intention. I believe I did my best. I was fighting with Sergey (Sirotkin), who was doing a little bit of go-kart racing out there. I couldn't really slow down. Pierre (Gasly) was on my gearbox and Sergey was on my front wing. I passed him, then as soon as I passed him, I let Lewis (Hamilton) by."

Kevin Magnussen: "It was a long day at the office. Obviously, it was a tough day for the team. I guess a slight highlight was getting the track record. It's not really worth anything but perhaps a smile. Let's move on, reset, and get ready to attack again in Russia."

Guenther Steiner: "Not the weekend we wanted. We fought hard. If you have to start on these tires, and the other ones are so much superior, if you qualify outside of the top-10, you have such an advantage, which you cannot make up in the race. Then we got stuck behind the Williams, which didn't move out of the way, one thing went to another, and that's where we ended up. Nevertheless, I think we tried to do our best. We are not as bad as it looks like."