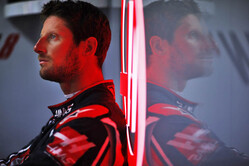 As the sole representative for Haas F1 Team in Q2, Grosjean earned the eighth fastest time with a lap of 1:38.367 to make the top-10 and advance to Q3 for the eighth straight time, a streak that began June 23 in qualifying for the French Grand Prix.

Once in Q3, Grosjean maintained his eighth-place standing with a lap of 1:38.320.

Both Grosjean and Magnussen ran exclusively on the Pirelli P Zero Pink hypersoft tire throughout qualifying.

Before Grosjean, Magnussen and the rest of their Formula One counterparts participated in knockout qualifying, they had one final practice (FP3) to dial in their racecars for a quick lap around the track. To emulate qualifying, both drivers ran hypersofts on their Haas VF-18s.

Romain Grosjean: "I think I had a great performance. On my last lap I had a massive oversteer into turn 21. I guess I lost about three tenths of a second, so it could've been really tight with (Sergio) Perez. You know, Force India, they were really quick in Monaco, and here it's the same kind of track, so I'm a little surprised. It's a shame Kevin couldn't make it through. I think he missed a tenth or so, and on a track like this, it's always difficult to find the limit in Q1. You don't want to push it too much to crash the car, but you've got to push it to get up there. The race is going to be super long. The hypersofts are doing about three laps and then you better be on softs. It'll be interesting tomorrow. It's going to be hot, there's probably going to be a safety car and, hopefully, we get a good race pace and keep the fight going."

Kevin Magnussen: "It's not only been in qualifying, I've been missing the pace to my teammate. It's really strange. I don't really have any answers as to why I'm suddenly a second off the pace. It feels like I just don't have the grip to go that fast. When you have a car that is somewhat well balanced, then it can only be overall lack of grip. I don't really know why. It's frustrating. I hope to find some answers as we look into it."

Guenther Steiner: "Definitely a case of mixed feelings today. We had a good FP3, but then Kevin never really got the speed out of the car, finishing 16th in qualifying. Romain had a fantastic qualifying, though, finishing in eighth. So tomorrow, I think we're in a little bit of a difficult spot. A lot of things can happen here at the start, and I'm hoping we're not involved in those things. As normal, we will try to go for points. We look forward to tomorrow."