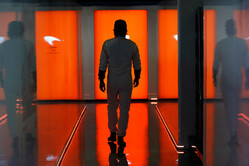 Although Stoffel had a difficult start to the day, both drivers ended Friday satisfied with the progress made throughout the two sessions. Stoffel ended the first practice session in 20th after only a handful of laps due to a suspension issue, which took some time to locate and fix. He also suffered a hydraulic leak shortly before the end of running. On the other side of the garage, Fernando had a smooth session and set the 14th fastest time.

The second session was much more productive. Stoffel's crew fixed the leak in time and he was able to complete his run plan without any problems, albeit slightly on the back foot having lost valuable set-up time. Both he and Fernando were able to conduct longer runs on different tyre compounds in preparation for tomorrow, and finished the sessions in 16th and eighth place respectively.

Fernando Alonso: "It was a positive Friday. It's always amazing to be around these streets at these speeds. We tried some interesting stuff, also comparing different configurations on the two cars. We gathered good information about the tyres and about the set-up changes that we were managing in both free practice sessions, and we will go through them tonight.

"I managed to get quite a good amount of laps under my belt, which on a street circuit is very important as the more running you get, the more confident you are.

"It's going to be a close battle to make it into Q3 tomorrow, but qualifying position is very important here so we are giving priority to our Saturdays performance. Track evolution we know is huge in Singapore, so you try to follow the track conditions as well, and I think our preparation for tomorrow's qualifying is okay."

Stoffel Vandoorne: "It was definitely not the easiest of Fridays, especially in FP1. We missed a lot of track time with a couple of problems on the car. Around a circuit like Singapore it's definitely not ideal because the track keeps evolving so much, and you need laps to find your rhythm and build up during the weekend.

"We started a bit on the back foot, but I think we recovered pretty well in FP2, finding my feet in the first run and having a reasonable run at the end. By the time we ran high fuel I think the pace was pretty competitive. We did a lot of laps in FP2 and I'm looking forward to hopefully having a clean day tomorrow.

"We learned a lot today, especially about the Hypersoft tyre. We've done a lot of tests across both cars so now it's going to be super important to put all the pieces together tomorrow. This race is massively favoured towards qualifying because the higher you can start, the better it will be for the race.

"It's a bit too early to talk about tomorrow. We're probably a little bit more competitive around this circuit because the power sensitivity is lower, so I think we should hopefully be a little bit higher, but we know that tomorrow the others will improve as well."

Gil de Ferran, Sporting Director: "It's disappointing that we had curtailed running in FP1 with Stoffel, for which, on a difficult circuit like this, you pay a very high price.

"However, both he and the team have recovered well in FP2. Fernando also had a more competitive Friday than of late.

"As usual, we went through several test items today and I think we have a clear direction for tomorrow."