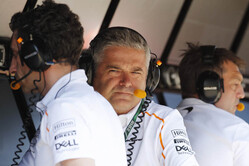 Fernando Alonso: "After difficult races in Belgium and Italy we say goodbye to Europe and start the fly-away chapter of the season. We were hoping to come away with points instead of two DNFs, but on the positive side we managed to find some pace on Sunday in Monza.

"The important thing for us to focus on is reliability, especially since Marina Bay street circuit should be better for us and our package, so we need to maximise our performance. Points are still definitely the target.

"The field is becoming very competitive as we progress through the season so we know we need to work hard to maintain the pace of development compared to our competitors. I'm looking forward to racing under the lights in Singapore and it's always a fantastic weekend of racing for the fans."

Stoffel Vandoorne: "Last year was my first experience of racing in Singapore and I really enjoyed it. In fact, it was there and in Malaysia that I scored my best result yet in Formula 1, in seventh place. It's a track that definitely suits the strengths of our package more than others, so I'm hopeful of a more positive weekend where we can show improved pace and take the fight to our competitors.

"Although I'm very much looking to the future since I confirmed I won't be racing for McLaren next season, I'm also 100 per cent determined to give everything for the remaining grands prix this season. Both the team and I are pushing very hard to get the best results we can with what we have, and it's certainly not over yet.

"Racing at Singapore was an incredible experience last year and I'm really looking forward to doing it again. Going through the whole weekend on European time is one of the coolest things about this race and it's a totally unique experience that we don't get anywhere else we travel to on the calendar. Let's hope we can have a positive weekend for the fans."

Gil de Ferran, Sporting Director: "The Singapore Grand Prix has become one of the most popular events on the calendar for its incredible backdrop, fantastic atmosphere and unique setting. Racing under lights and in extreme temperatures and high humidity is a tough challenge for the drivers, but it really shows you how hard they have to work behind the wheel to get a good result.

"This race has produced hugely entertaining race weekends in the past and I hope this year it will be no different. We are optimistic that our package should perform better on this type of track, but of course nothing is guaranteed, especially at a grand prix as unpredictable as this.

"Although we confirmed our full driver line-up last week, we won't have Lando with us in Singapore since he'll be conducting valuable race simulation with the team back at the factory. The race team, Fernando and Stoffel will all be working hard to find as much performance as possible this weekend with the aim of bringing home some valuable points."

Slow-speed grip: Most of the corners are taken in either second or third gear, so getting the power down effectively at slow speeds is crucial to lap-time. This is particularly difficult at the start of the weekend, when the asphalt is very dirty and slippery.

Unique difficulty: The lights. The Singapore Grand Prix begins two hours after sunset and the track is lit up by 1,500 lamps, positioned six metres above the asphalt. The artificial light takes some getting used to by the drivers and, although the start of last year's race was damp, the impact of a fully wet race on visibility has yet to be established.+

Biggest challenge: Heat and humidity. The ambient temperature rarely drops below 30 degrees and with humidity levels of around 85 per cent, this race is now the most physically demanding in F1. It's also the longest race of the year, regularly exceeding the FIA's two-hour time limit, and drivers expect to lose up to three kilos in sweat during the race.

Braking: Heavy. There are 15 braking events per lap, which is more than at any other circuit in F1. The drivers spend, on average, 22s per lap on the brakes and the peak deceleration is 4.7g into Turn Seven.

Power: The cars use 1.9kg of fuel per lap, which is high. Fuel consumption is a consideration for the teams at this race.

Aero: Maximum downforce. The circuit's average speed is only 8mph (13km/h) higher than at Monaco, so the engineering emphasis is on slow-speed grip, good turn-in and traction.