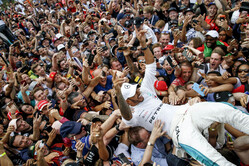 Not that long ago, Lewis Hamilton found himself criticised for his activities away from the race track, sections of the media insisting that a celebrity lifestyle which saw him mixing with stars of the music, fashion and movie industries was compromising his 'day job'.

While the Briton has been known to have the odd off-weekend, his four titles are clear proof that for the most part Hamilton gets the job done.

This week however saw the world champion launch his own fashion range, unveiling the collection in Shanghai before heading to New York for the 'star-studded' launch party.

Asked at today's press conference, at a time rival drivers make much of having to physically prepare for the physical demands of the Singapore weekend, how he appears so fit and raring to go, despite his hectic schedule during the break since Monza, and whether he finds it easier these days, he replied: "It's not that I find it easy. As soon as I leave the races I'm able to switch off.

"I've got, obviously other things that I'm doing," he continued, "and in between, trying to fit in the training, for example, in the last week, has not been easy. But that's not really how every single week goes for me - it's just a hectic time for me with a lot going on in the outside world for me.

"But yeah, I mean, I've travelled a lot more than I have all year long in these two weeks. But I think yeah, from experience I've been able to move around even more than I have these past two weeks and still arrive and be able to switch into race mode.

Pushed on whether he was taking a gamble, in getting involved in other projects whilst still battling for a fifth title, he insisted: "Not at all...

"I get a lot of energy from these different things that I do. I find it stimulating and I think you'll see that my results have shown that for the past several years.

"As I've said, I've travelled a lot more than I have this year. This has actually been the year I've travelled the least, at least in the last five years, so..."