Hamilton eyes plan for the future 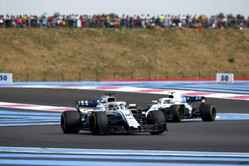 While Formula One's much-anticipated return to France saw the drivers express concerns with the pitlane and officials now wondering whether to drop the chicane from the Mistral Straight, fans attending the event had their own problems.

Other than the well documented issues with traffic, the work carried out at the facility since it last hosted a Grand Prix and which has seen it become one of the world's leading test tracks involves those massive blue and red run-offs that leave the spectators further away from the action than at any other track.

"I think it's really so beautiful down here and I've really enjoyed my week," he said. "I stay right close to the track and earlier in the week the weather was particularly spectacular but it was really great.

"It felt like... particularly when we did the drivers' parade today it felt like an older day race, when there were people everywhere, just surrounding the whole track. There are a lot of tracks we go to and the grandstands are not even half full, there's massive long banks that are just empty. Today there was a lot of people here which is great.

"What I dislike is that they are so far away from the track," he admitted, "like you go to turn eleven and they're like a mile away from...

"They must all have binoculars," he continued, grinning. "Next year I'm going to bring a binocular stand 'cos I'll probably make a lot of money on it so people can watch.

"There are a couple of bits on the track that I really like," he added, "like the more and more I drive it the more I was enjoying it, particularly like sector one, like turns one and two, when the wind is with you, it's ***kin' awesome. It's hard to see the corners and obviously the back straight is not the greatest, the chicane, and it's not that easy to follow here so maybe for next year they can make an alteration of some sort, maybe, so there can be more overtaking maybe?

"Ultimately I think it's the fundamental issue of the cars. We shouldn't have to have... I think it's a 1.5 second delta: Max has to be 1.5s faster than me to overtake me today or more. Anything less than that and he's got no hope.

"People... I want to see more closer racing, not just at the start of the race, so I hope in the future they are able to somehow figure that out. But I'm glad we had the race here and this is, for sure, my best race weekend in France."