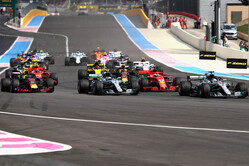 Mercedes chief Niki Lauda and Lewis Hamilton, who between them have seven drivers' titles, have hit out at the 5s penalty given to Sebastian Vettel for the first corner clash which damaged Valtteri Bottas' car and effectively ended any hope of what both saw as a certain 1-2 in France.

While the German accepts responsibility for the incident, claiming he had "nowhere to go" following a superb start, Lauda and Hamilton both feel the subsequent 5s penalty, which he served during his first pit stop, was derisory.

The subsequent stops following the clash saw both Vettel and Bottas fall to the back of the field, but while the German was able to carve his way back to the front, damage to the Finn's car compromised his efforts.

In awarding the penalty, the stewards deemed that Bottas "clearly left room on the inside of Turn 1".

Asked if a 1-2 had been possible, Lauda told Sky Sports: "I think we could have done, and why Vettel only gets five seconds for this enormous mistake I don't really understand. It is too little.

"There is more time they can give them," he added. "That is what I mean. Five seconds is nothing. He destroyed the whole race for himself and Bottas."

Meanwhile, in the ante-room before heading out on to the podium, as he watched a replay of the incident with Max Verstappen, Hamilton said: "Jeez, he took him right out... oh, man, that's crazy."

Speaking at the subsequent press conference, when asked about the incident, the world champion said: "I've not seen it in detail but they quickly played something back there. I saw an image of it on-screen.

"For me it's disappointing because for the team we had the chance to get a one-two, and I think that would have been a... it's always an incredible feeling to get a one-two, that's the ultimate goal within the team.

"Valtteri had really done a solid job all weekend, as he has really been doing this year. I mean, we're all going into Turn One as hard as we could - but yeah, ultimately when someone destroys your race through an error and it's only kind-of a tap on the hand really, and just allowed to come back and still finish ahead of that person that they took out, it doesn't weigh up, y'know?

"Ultimately, he shouldn't really be able to finish ahead of him, because he took him out of the race. But, yeah... that's the call they made."