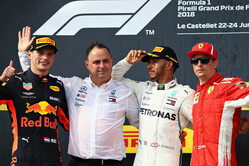 Franck Montagny: Lewis, congratulations for this beautiful win. How was it for you, because you were clear from every problem, so how was it for you?
Lewis Hamilton: I feel very grateful. Just grateful for a solid weekend. My guys, I've been with them for six years and they are just continually pushing the boundaries and never giving up, so I'm just forever grateful for all their work, here at the track and back at the factory. This is a great day, really. I enjoyed the race. The weather was good and the fans have been crazy today. It's been really good to see so many people here for the French Grand Prix. So for me personally, this is the best French Grand Prix I've ever had.

FM: Happy to take the lead again, of the championship?
LH: I hadn't really thought about it, but that's where I want to be.

Jean Alesi: Hey Max, a happy Sunday?
Max Verstappen: Yeah, it was good. I tried to follow Lewis, of course he was controlling the pace. Yeah, I had a good race. I enjoyed that. Of course, I didn't really have to work very hard for it but it's always good to be on the podium.

FM: Kimi, fantastic race for you also. You finished on the podium. What is your feeling after this crazy start?
Kimi Raikkonen: Yeah, I think everybody more or less got similar starts and it felt quite slippery in the first corner. I chose to go outside but it was the wrong side in the end, I should have slowed down a bit an cut in on the inside, so I got a bit blocked with all the mayhem that happened. Then we did a decent recovery in the long stint and things worked well and in the end we had a lot of speed and I managed to get on the podium

Q: (Ben Hunt - The Sun) Congratulations, Lewis. I just wondered if you did get to see the England before the race and what your thoughts were?
LH: Honestly, I didn't get to see the game. When I walked into the garage to put my helmet on, I saw it was 6-0 at the time. And then when I went out and did the three laps of the grid and came back to go to the toilet and as I went to the toilet I got to see it again and it was 6-1. I mean, jeez, that's a mighty score. What a great result for England.

MV: They're going to bring it home, right?

LH: Jeez, I hope so, if they're playing like that. They need to keep opening the can of whoop-ass on everyone and that could be frickin' awesome. I don't know how England would be able to take it though if we did win the World Cup. It's been such a long, long time...

Q: (Aurelien Attard - Le Mag Sport Auto) Lewis, you just won your 23rd grand prix in a different country and you've now beaten Michael Schumacher's record?
LH: I didn't know that. It's news to me. Every time I'm told of these records I'm blown away by Michael, even more and more. He had obviously a long career and incredible statistics, and did a... it just brings me back to watching him as a kid. I was actually just sitting here thinking, and I don't know if Kimi knows, I remember growing up wanting to be in Formula 1 and obviously I was at McLaren since I was 13 and I used to play F1 on the Playstation all the time and I was always Kimi, which is kind of crazy. I wasn't Montoya, I was always Kimi in his car and I always wanted to race against him. It's just crazy how life works and how you get the opportunity to work with some of these legends. I don't know if they realise the respect that the younger generation will have for them. Maybe you do, maybe you don't but... yeah.

Q: (Joe van Burik - Autocar.nl) Question to Max. Max, when did you realise during this weekend that the soft was the best tyre for your second stint? How do you feel about the fact Lewis was able to hold back, ahead of you?
MV: I think quite quickly we realised the soft was a good tyre already from the start of the weekend. And yeah, Lewis was just doing his race and I was doing mine and he was just controlling the gap. So, not much you can do. You just then have to focus on yourself to just drive a clean race.

Q: (Scott Mitchell - Autosport) Question for all three drivers. Wanted to get your thoughts on the first corner incident between Seb and Valtteri and the fact Seb got a five-second penalty but was able to come back to fifth. Do you think that was a bit too lenient? Lewis, I know you were in front at the time but I think you've seen a replay since.
LH: I've not seen it in detail but they quickly played something back there. I saw an image of it on-screen. For me it's disappointing because for the team we had the chance to get a one-two, and I think that would have been a... it's always an incredible feeling to get a one-two, that's the ultimate goal within the team. Valtteri had really done a solid job all weekend, as he has really been doing this year. I mean, we're all going into Turn One as hard as we could - but yeah, ultimately when someone destroys your race through an error and it's only kind-of a tap on the hand really, and just allowed to come back and still finish ahead of that person that they took out, it doesn't weigh up, y'know? Ultimately, he shouldn't really be able to finish ahead of him, because he took him out of the race. But, yeah... that's the call they made.

Q: Kimi, what's your thoughts on Seb's penalty, you had to avoid that incident at the start?
KR: I didn't even know that he got a penalty. I saw quickly kind-of what happened but I only see the part when they touched. Things happen, y'know, and obviously, there is stewards, they give penalties if they feel it is the right thing, sometimes they think not for others and we live with it. Is it fair sometimes? Maybe not - but y'know, I think it's balancing out in the long run between all of us. So, yeah, unfortunate for both of them - but that's what happens sometimes.

Max, anything to add on five-seconds penalty for that incident?
MV: Yeah. I think next time you see Seb you should ask him to change his style, y'know? Because honestly, it's not acceptable. That's what they said to me at the beginning of the season, so I think they should do the same! And then, of course, Seb shouldn't do anything, and just drive again and learn from this and go on. That's my advice to everyone in this room.

Q: (Livio Oricchio - Globoesporte.com) To all drivers. Three different teams on the podium, like the last race. The next grand prix is a completely different scenario to this one. What can you project for the Austrian Grand Prix?
KR: Hopefully good things. Impossible to really say. It's a slightly different circuit. We need to make a good weekend out of it. It's going to be pretty close. I don't see massive difference between the top three times - but I might be wrong.

Lewis, are you expecting Mercedes to go well next weekend in Austria?
LH: I think Austria should be a fairly decent track. It's been a decent track for us in the past, so I don't see why it should be any different now. I think the car should be good there. I think the Red Bulls have been particularly quick there in the past because it's quite a good downforce circuit, so it'll be interesting. As you're seeing, the cars... it's great that we are close in qualifying nowadays, but positioning is everything really in qualifying, and you can't overtake. At that track you can't really overtake... even though you've got those long straights, very, very difficult to overtake. You can't follow through Turn One. It's going to be about who qualifies where at that track, isn't it?

Another part of that question was that the tyres will be different next weekend. Does that make any difference to the pecking order, do you think?
LH: Jeez, we'll see. The tyres felt the same to me this weekend. Are we having the soft...?

I think it's the tread-depth compared to here.
LH: yeah, but we'll still have the soft, supersoft and ultra, I'd imagine. Should be OK.

Q: And Max, how do you see Red Bull going next weekend at the home race?
MV: I think, yeah, Red Bull has been on the podium for the last two races out there. We are a bit compromised on the straights but somehow it was always not too bad. I'm also looking forward to the weekend because I think a lot of Dutch fans are coming out so a lot of orange around, so that's always good.

Q: (Phil Duncan - PA) Congratulations, Lewis. Just on Seb, we've seen him make a number of high profile errors as Max alluded to, in the last 12 months. Maybe last year, Baku, Baku again this year, Singapore at the back end of last year, today. There's been a few. Does it surprise you that someone of his level keeps making what are proving to be costly errors?
LH: I'm not really going to get into that. Honestly, I know what you're saying but it is really a racing incident in turn one and those things can happen. We're all going into that first corner at great speeds, it's not always easy to... I mean I went deep and wide because I saw them really close to me so I thought I was going to get rear-ended, to be honest, so I went quite deep. No, I don't feel that he's particularly made more mistakes than... we're all on the edge, we're fighting for the World Championships, we're not pootling around, we're out there putting our lives on the line, we're out there putting the cars as far beyond the edge as we can in the safest manner. It's not like a train track, you don't just stay on the rails. Sometimes you can go off. We're only human.