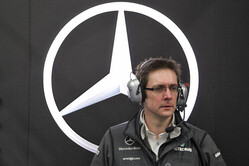 Though it was to ultimately end in heartbreak, Mercedes admits that the decision not to react to Sebastian Vettel's pit stop on the 30th lap of Sunday's Azerbaijan Grand Prix and to leave Valtteri Bottas out, was based on the hope that what had been an incident-filled race might yet witness the deployment of the safety car.

"That was what we were hoping for," admits trackside engineering director Andrew Shovlin in the latest edition of the team's Pure Pitwall.

"It's Baku," he continues, "and there's a pretty good chance of getting a safety car. When Sebastian came in he leaves this window so that he's sufficiently far behind us so that if we stop under a safety car or a VSC, and you get the shorter pit loss, we could actually take the lead of the race.

"They're hoping that there isn't one," he says of rivals Ferrari, "but it's one of those strategies that you play for. It's actually quite difficult to leave the race and control it, because you are protecting against people undercutting you, but also this issue with the safety car, and you can't do both. So that's where it does create opportunities for whoever's in P2."

However, Shovlin admits that Plan B, had the safety car not made an appearance, was to pit Bottas late in the race and switch him to ultrasofts in the hope of catching Vettel in the final laps, as was the case - though ultimately unsuccessful - in Bahrain.

"If there hadn't been a safety car, we would have come in with Valtteri, we would have taken the ultrasoft, about 10 laps from the end of the race. The super wasn't degrading, it was going really well, and we could run it as long as we liked. Those 10 laps would have given him just enough time to catch up with Seb, and battle him for the win. And he would have done that with a couple of laps remaining."

Referring to the puncture that was to break Bottas' heart, Shovlin admits that the team wasn't aware of the debris until half-a-second before the Finn encountered it.

"We didn't give him a warning because we didn't see it," admits the Briton. "The first time we saw it was just as he came over those bumps.

"That was why he was also blind-sighted. You could see him heading towards it, but it was half a second or a second or so, and it was not enough time for us to get on the radio and tell him that there was debris on the track.

"If we had seen it we would have warned him, as we were doing a lot of the other laps with the other accidents. We were trying to guide them as to the best bit of track to avoid it. Unfortunately on this occasion it was all too late. It was a real shame for Valtteri, he'd driven brilliantly all weekend, a super composed race."