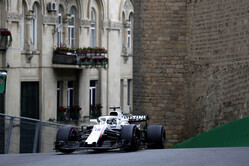 Paddy Lowe, Chief Technical Officer: What we set out to do was achieved today. It looks to be the normal close competition, so we'll be working very hard tonight to make sense of all of the data from testing today, to try and find some extra tenths which could make a very big difference in terms of the qualifying order. We also need to remember that what we really need is a good race car, as it's relatively easy to overtake here, so race pace is paramount.

Lance Stroll: I have great memories from here in Baku, and I am not going to lie, it was a little emotional walking back in the paddock. It was a tricky day for everyone. We saw a lot of lock-ups and a lot of yellow flags. There was a lot of traffic out there, as expected, but it was still a positive day in many ways. We are still not where we want to be. At the same time, we saw some improvement in FP1 and then in FP2 we dropped back a little bit, but it is still much better than where we were over the last few events. I think there is still a lot more to come, so we will see tomorrow what the others do and where we are in the field.

Sergey Sirotkin: There's a very big contrast between the beginning of the day and the end. FP1 was positive with the work we did and the information we collected. It was good to have both cars in the top 10, so that was a good start to the day. We were less lucky in FP2. I was a bit limited with the amount of tyres I had, because I had just one qualifying tyre and the rest were used primes, so that didn't help me get the best from the low-fuel performance runs. The high-fuel runs were very messy with the traffic. I did a couple of clean laps, but I don't think we got the best numbers for the life of the tyre, and for the wear, and overheating. That's a bit of a shame because it started very well in the morning, but this session was one of the worst so I'm quite disappointed with that.