Sirotkin: There is a cure 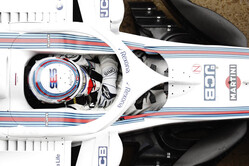 Three races into the season and Williams finds itself last in the standings, the only team still to score a point.

Worryingly however, the team has not looked even likely to score a point having only once (Stroll, Australia) made it into Q2.

While most point to the team's driver choice and self-admitted financial concerns, the team points to the FW41 itself. Despite using the same engine as the works Mercedes and Force Indias it is clearly lacking speed, particularly on straights, a major worry for the team in Baku, scene of last year's podium finish for Stroll.

Teammate Sergey Sirotkin however, is confident the Grove outfit will overcome the problem.

"There is a cure," he told reporters. "We found something which is not really giving us exactly the performance and numbers we were expecting, which affects basically all the way how the car works.

"Now we are flat out to solve this," he confirmed, "and we think that once this issue can be solved, the car will open up and work as it was originally planned.

"It's a tough moment for us," admitted the Russian, "but personally, I am enjoying that it gave us a very strong challenge, I think there's a very good spirit and a clear and obvious task ahead of us.

"The way we are all trying to solve it has really united the team and I am really enjoying being at the factory, staying together with the team, fighting every single day to solve the problem.

"It's not that nice to be not the quickest car out there but I am very confident that one day we will get over it and that day I will be very proud for all of us that we stayed united and worked harder than anyone else to get on top of it."

"Unfortunately we haven't recovered enough of the cornering speed to compensate for losing that straight line speed this year," added teammate Stroll.

"We don't have the handling benefits that we were looking for, we've lost a good chunk in our strong point and we have not gained enough in our weak point."