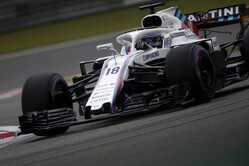 Lance Stroll finished 14th and Sergey Sirotkin 15th in the Chinese Grand Prix. Both cars started on the soft Pirelli tyre, with Lance starting 18th and Sergey 16th. Both cars made good starts, making up multiple positions to end the opening lap with Lance moving up to 12th and Sergey 15th. Lance made his only pitstop of the race on lap 23 for the medium tyre. Sergey pitted for the medium tyre on lap 28, and then changed to a two-stop strategy under the safety car, by pitting for the soft tyre on lap 33.

Paddy Lowe, Chief Technical Officer: Although these aren't great results, and certainly not in the points, compared to where we were in Bahrain it's fantastic get two cars to the finish in 14th and 15th. We were certainly in the race today whereas in Bahrain we were not even competing, so a much more positive feeling for everyone and something we can build on in the weeks to come. Both cars had really good starts off the line with Lance taking the most profit out of it, through turns one and two, and getting as high as 12th with Sergey 15th. We always planned the one stop soft-medium and we stuck with that as it was working very well for us. The safety car didn't help us that much but we took the opportunity to put Sergey on the soft tyre, which appeared to be a better tyre for us and for this circuit, as indeed it appeared to be for the front runners. On pace, we were able to beat the Saubers but through strategy, we were able to beat both Toro Rosso cars, as well as the Haas of Grosjean.

Lance Stroll: It was a great start again and, like in Bahrain, I made up five or six positions at the start. Then after that I believe we raced the maximum out of the car. We were not very lucky with the safety car, because the guys on two stops got a free pitstop in front of us. I think the Force Indias were possible to beat today, not on pure pace, but with the good start and everything. It was a bit of a shame, but I am really happy with the race. We got our strategy done and I believe we got everything out of it today.

Sergey Sirotkin: It was a difficult race. I had nothing to lose so I had to fight at the start. I tried to get some positions but when you're right in the midfield it's difficult to do something and I think I could have managed better. Afterwards I really struggled to find the pace. It was quite difficult to find the window with the tyre and it was a very tough first stint. At some points when I was in free air for a few laps it was stabilising a bit, but overall it was really tricky. We pitted for a new set of mediums and then new softs under the safety car. I don't know what happened to them but they had far less grip than the mediums so we lost quite a bit with that, then we were just trying to get to the end of the race.