Stroll hits back at Massa 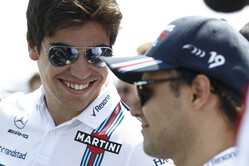 Lance Stroll has hit back at Felipe Massa's claims that Williams is suffering because it put money first when it came to driver choice.

Last week, the Brazilian claimed that the Grove outfit's current position, which sees it languishing at the bottom of the standings, the only team yet to score a point, is due to the fact that it opted for two inexperienced drivers with backing rather than paying for more talented and experienced drivers.

"I don't understand what he's trying to say," Stroll told reporters when asked about his former teammate's comments.

"First off, Felipe is not here, he's gone, he's retired," he continued, clearly unhappy. "And last time I checked I finished one position behind Felipe... and not really using Felipe as a reference, but using myself as a reference.

"I look at where I was at stages last year when the car could do it, in China I was in Q3, in other races I was, many races I was scoring points. So it's not like I know I can't do it, or that it's not possible," he added. "At the moment the problem is that with a really competitive and good race, we are P14, P13. And last year we were comfortably in the points many times. So that's how I look at it."

"I don't pay much attention to comments, but obviously it's not very pleasant," added teammate Sergey Sirotkin. "Everybody's talking about a lack of experience, about bad feedback and so on, but during my career I've realised that the number of seasons you've raced doesn't directly make your feedback better and make you understand the car better. It doesn't mean that at all, because I've seen all kinds of examples.

"It doesn't matter what experience you have, all that matters is how quickly and how concrete you are with the feedback you are giving back to the engineers," added the Russian, who has a degree in race car engineering.