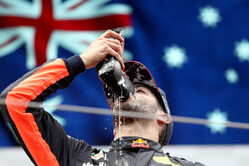 Red Bull team boss Christian Horner has said that Daniel Ricciardo has until August to decide his future, after which time the Austrian outfit will begin looking at other possible teammates for Max Verstappen in 2019 and beyond.

Ricciardo, who took a surprise but well-deserved win in China, is one of a number of drivers out of contract at the end of the season.

However, a number of factors, not least uncertainty over whose engines the Milton Keynes based outfit will be using next year, have left him holding off on making a decision at this time.

Indeed, in the wake of his Shanghai win he admitted that much will depend on whether Red Bull can help him win further races this season.

While the Australian is said to be of interest to both Mercedes and Ferrari, neither of which, he claims, has made an approach, Christian Horner warns that his current employers cannot wait forever.

"We do not want to wait forever," he told Auto Motor Und Sport. "We have other good options.

"There should be a decision by the summer break at the latest," he added.

"Our priority is to continue working with Daniel," he admitted. "If that does not work, we'll pull the other options. The most obvious is Carlos Sainz. He is under contract with us. And then there are a few young drivers."

Throwing a further spanner in the works, Ricciardo says he only wants a two-year deal, which would take him through to the end of 2020, the Australian admitting that uncertainty over the sport's future beyond that date - as its new owners seek to overhaul the prize money allocation, among other things - has caused him to doubt the direction in which the sport might be heading after that time.

In all honesty, it's likely that the Australian will have made his decision long before August... assuming he hasn't made it already.