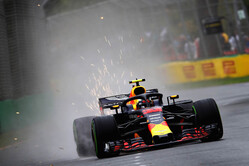 Max Verstappen: "Even with a small mistake I really enjoyed Qualifying today. It's difficult to say what I expected heading into the session but it should have been a little bit better. I made a mistake on my last fast lap and went wide at turn 13 which lost me a few tenths compared to my previous run, we were still very close to Ferrari which is positive but maybe we could have been second. Mercedes were quite far ahead as expected, had I not made my mistake I think I would have only been about half a second off Lewis which is closer than in the past. All things considered and with the right strategy I think we can be competitive during the race tomorrow, with Mercedes I'm not sure but I think we can have a good fight with Ferrari. We are hoping to go a bit longer with our tyre selection so if we stay out of trouble at the start we can settle in and have a strong race. I am happy with the pace and feel for the first race weekend, so I'm hopeful we can improve and move forward from here, not just tomorrow but for the rest of the season."

Daniel Ricciardo: "The session itself didn't go too badly, it started off pretty well and even in Q2 on the Supersofts we were looking good. I aborted the second run, but nonetheless we were looking alright. In the last part of Q3 we just missed a bit in the first sector, I'm not totally sure where the time is so we'll have to look at that. Overall, the car didn't feel too bad, we asked for a bit more front grip but we'd used all the front wing we had, so there was no more we could do in Q3. Obviously starting eighth because of the penalty is frustrating and I thought it was unjust. There are reprimands, fines and other things but to shoot me in the ankle before the season starts, well, I think they could have done better. We're the only ones in the top 10 staring on the Supersoft so hopefully that helps us and ideally the leaders have trouble making the one stop work with the Ultrasoft and we capitalise there. It's going to be pretty tricky to overtake so strategy will be key. The race pace looks pretty good and I'm looking forward to coming through the field. We're obviously better than eighth so we will try and make it happen. To be honest, I feel sorry for the guys in front of me tomorrow as they're the ones I'm going to have to take my anger out on."

Christian Horner: "After the rain this morning we had a dry Qualifying, and it was certainly very tight between ourselves and the Ferraris. Unfortunately Max on his last lap made a small mistake at turn 13 that cost him a couple of tenths otherwise the front row was potentially achievable today. Daniel also did not have a perfect Q3, finishing in P5 and unfortunately with the penalty he incurred yesterday will be starting in P8. We've elected to start on a different tyre strategy to our competitors and hopefully that will provide different options for tomorrow."