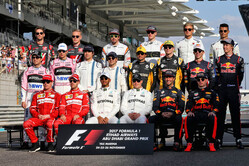 For the first time in living memory, all current drivers are members of the official drivers' union, the Grand Prix Drivers' Association (GPDA).

In recent years a number of drivers have resolutely refused to join the union, among them Lewis Hamilton and Kimi Raikkonen, but according to GPDA chairman Alex Wurz all current drivers are now members.

The move will hopefully give the drivers more say, after all, as Pitpass has long pointed out, these are the men putting their lives on the line every second weekend, the men who know first-hand where the sport is missing out and where it can be improved.

However, in the wake of the purchase of the sport by Liberty Media, which in some ways has opened up the sport, while fearing the direction F1 could be heading, the drivers feel that unity in terms of the GPDA will force the 'powers-that-be' to listen.

"F1 is entering a period of evolution, change and perhaps even a degree of turmoil," said Wurz, according to the BBC. "They recognise they must be united and represented to face that challenge.

"We consider F1 a sport, not show," he continued. "A driver rightly so calls himself a sportsman not showman, because it is still about the most natural human aspiration... to go faster, higher, quicker."

However, he insists that the drivers want to "prevent any politics or power fights from ultimately compromising on-track performance. The drivers believe unity is fundamental for the sport's success.

"We are all particularly proud that the new cars, with their faster cornering speeds, had such great effect," he said of the 2017 regulation changes. "The drivers love them and we have seen an instant increase in viewership and followers. The GPDA pushed for this rule direction for the last three years. Happy drivers are F1's best sales tool."

However, there are a number of areas of concern for the drivers including the increasing use of asphalt run-offs, the move towards pay TV, grid penalties, the difficulty in overtaking, the noise of the new formula and the budget disparity between the teams.

"We are glad that Liberty and their technical research team followed the GPDA's suggestion from more than a year ago, where we wished for a less sensitive airflow concept of aerodynamic-related rules in order to be able to race closer. That's just one example and one of many the drivers have in mind."

However, he insists that the GPDA isn't seeking to rock the boat, demanding an equal say in the running of the sport as the teams.

"We don't need a seat at the table, because the drivers are in the driving seat anyhow," he said. "Besides, I would be surprised if any of the key stakeholders would invite the drivers to the F1 decision-making table. The GPDA demands only that the sport remains the centre of attention and we want to hold everyone in the decision-making process accountable for their actions and decisions. All adjustments to the sport should only be done and conducted in the best interest of the sport and not of any one individual. This is what unites the drivers; the sheer will to keep F1 as the pinnacle of motor racing."

As Liberty seeks to expand the calendar to at least 25 races, along with promotional events such as that witnessed in London last year - with further events planned for next year including Marseilles ahead of the French Grand Prix, Berlin and Moscow - not to mention the pre-race ceremony in Austin, Wurz admits that drivers are worried the sideshows, including the politics and rows over money, when combined with the domination of the season by one team and the lack of overtaking will all help dilute the sport.

"We have so many - and now too many - contributing factors which dilute this simple core value, and every day the list of threats to F1 grows," he said. "Thank God the underlying product is so strong, but previous business decisions and political power battles have already scarred the sport, so it needs very careful and considerate adjustments to the sport and its rules. Also F1's business model cripples the sport's progress and would need readjustments."

"We can't be naive about the situation F1 is in, with its complicated governing rules and agreements between various key stakeholders. Business decisions and political power fights have damaged the sport enough at exactly such vulnerable times over the last decade. But the GPDA has repeatedly said that the on-track action needs to be better, more closely fought and authentic."

Again, it is good to see the GPDA finally speaking up. However, it must ensure that it focusses on the interests of its drivers, in terms of safety and in terms of improving the racing.

In terms of safety, the GPDA threatened that its members would boycott the 2013 German Grand Prix following a number of tyre failures over the preceding Silverstone weekend, while in 2015, in the wake of the death of Jules Bianchi it reiterated its commitment to never relenting on safety.

In terms of speaking out over the regulations, in early 2016 the union was highly critical of the sport's bosses following the dithering over the controversial new qualifying format, then directors Jenson Button, Sebastian Vettel and Wurz issuing an open letter in which they claimed the sport's leadership was "obsolete and Ill-structured".

However, with an eye on the huge financial row that is about to break out and the ongoing unease over the 2021 engine regulations, the very last thing this sport needs is another self-interested political body seeking to further tear the very heart out of it.