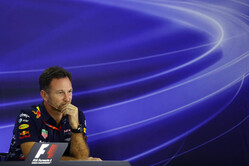 As previously reported, in the nine months to September, the prize money paid to the F1 teams fell by £31m with the prediction that the trend would continue for some time yet.

There are various reasons for this, including the reduction in the number of races this year compared to 2016, however, new owners Liberty Media's failure to secure new sponsors combined with its spending on new offices, staff, promotions such as the London event, investment in the sport’s infrastructure and Ross Brawn's technical team have all had an impact.

Rapidly becoming Liberty Media's 'teacher's pet', Red Bull's Christian Horner accepts the downturn in prize money - his team can afford it - insisting that one has to speculate to accumulate.

Asked about the falling revenue, the Briton told reporters in Abu Dhabi: "Inevitably as they've invested in an infrastructure their costs have gone up.

"The model that they have, compared to the previous management obviously is significant different," he continued, "but perhaps, in the world that we live in, it's appropriate for where the commercial rights holder wants to take the sport. So it's inevitable that they've got to invest.

"I think the rights holder made a very generous offer to those teams that want to take it to effectively advance monies to ensure that the money next year available to the teams is the same as this year and the latest forecast, on an interest-free basis," he then revealed. "They've offered to basically fund that bridge for those teams that wish to take it.

"So, and of course, when you're building a structure, you've got to invest in that. Obviously, they've moved premises, they've moved offices, they're running a different ship to how Bernie operated it. Bernie was the salesman, he was a one-man show, which was always going to be unsustainable because there was no individual that could single-handedly replace him. So, I think with the structure that's been put into place, hopefully dividends and benefit will come - but it's going to be a little bit further down the road. Probably we're looking at 2019, 2020 and particularly 2021 before we're going to see the fruits of their investment."

Ecclestone himself used to advance teams on their prize money, but this was usually in the name of cash-flow, to tide the teams over until the next pay day. He did not advance money in the face of falling revenues because, for the most part, on Bernie's watch revenues didn't fall.

With the row over how the prize money will be divided, not forgetting those all-important bonuses, yet to fully erupt, Mercedes boss Toto Wolff queried just who should be paying for Liberty's grand plans for the sport.

"The question is where does investment come from," he said. "Is it the prize fund or... when you invest, are you raising capital and you make a rights issue and dilute the shareholders, or do you dilute the teams? I don't know. To be discussed.

"But as a matter of fact, they are in the first year. I think year number one needs to be a honeymoon period after Bernie. We are maybe also a little bit spoilt, because over the last ten years at least I've been around, we had a growing prize fund, every single year we could rely on a per cent or two at worst; at best ten per cent and in so far, we have been also relying and building our structures. You need to support them, because it is our joint platform, and grant them this period and then hopefully see the hockey stick business plan is actually coming to fruition, and this is a dip; a momentary dip that we see, and hopefully it's going to grow again soon."

"I think for sure they were not investing so much money to have a sport that is falling down," said Maurizio Arrivabene. "After one year it is not easy to judge. I know that early December they want to present to us their plan for the future. I hope there is going to be at least a three-year plan.

"So, this year we were a bit together, a bit. We were together with them to support, to work and to try to build up the future but, as Toto mentioned, as Christian mentioned, it was the first year. It's not easy to judge - yet. We need to sit down with them and see, and to look at their business plan for the next few years and then we can have a judgement of a clear picture of where we want to go. Where Formula One wants to go."