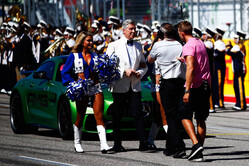 It was possibly the F1 equivalent of 'Dad dancing', the sight of boxing announcer Michael Buffer, his face tanned yet expressionless, in many ways resembling an ageing Max Headroom, making his way to the Austin grid with a young lady on each arm.

Before the veteran had even opened his mouth to begin announcing the drivers, the sight of the 73-year-old accompanied by two young women the Daily Mail would typically describe as "displaying their ample assets", made one feel slightly uncomfortable, especially as the Harvey Weinstein scandal had broken just days earlier.

While one applauds any attempt to improve the show, in the eyes of many this wasn't it, indeed Ferrari president Sergio Marchionne says it was undignified.

"I think there is an opportunity here, if we do the things right, to make this a relevant sport in the U.S. environment," he told a press conference on Saturday as Sauber, now in partnership with Alfa Romeo, revealed its drivers and livery for next season.

"If we do that I think it will benefit the sport tremendously," he continued. "But I put a big proviso on this. We need to be careful that this desire to make us attractive to the American public doesn't end up sapping away the DNA of a sport that has some noble origins.

"I think we need to preserve it, we need to modernise it in a way which Americans find relevant," he said. "And that's the tricky part that I think Chase and I need to walk. We're walking a tightrope on this because if we go too far to try and appeal...

"The performance down in Austin and the way in which we arranged the show was not what I think a Formula One event ought to be," he admitted. "But it was part of a trial and error exercise, I don't think it worked incredibly well. I think a lot of the Europeans were somewhat taken aback by what happened. We need to find a halfway house that somehow appeases and actually enhances the interest of the public on both sides of the pond."