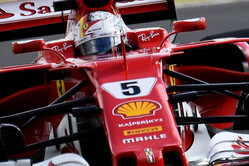 A first-row grid position rewarded Seb's efforts today, while Kimi had a troublesome Saturday. After crashing in the P3 session at Degner curve, a race against time started in the garage, which saw Ferrari's mechanics complete the almost impossible task of re-building the car around a new gearbox in time to send Kimi out in Q1. He will have to serve a 5-slot grid penalty though, while Seb's third best time is good enough for second place, as Valtteri Bottas also had to fit a new gearbox to his car and will therefore drops down the order.

Sebastian Vettel: "I think the car was very good today, and I was happy with it, but it was just not enough for pole position. In my last run, I tried to push maybe a little too much, knowing that Valtteri wasn't a threat because of his grid penalty, but it didn't work. But overall, our car was fine. Tomorrow is supposed to be sunny and hot, which makes the difference and then we'll see. We normally have a stronger car in the race than in Quali. It's important to have a good balance here and then you can always try something with the stops. Also, I am confident we should have a good start, and that is important, but after that there are a lot of laps and strategy is important as well. In terms of pace, hopefully we should be closer to our competitors. We'll see tomorrow."

Kimi Raikkonen: "It was not a great start of the day to go off track this morning in P3, not the ideal preparation for qualifying. After that, everything got more difficult, but the team did a great job to get the car back in one piece. In Qualifying the car felt ok, but it was a bit tricky; the biggest issue was the limited running we had had with new tires in the morning. In Q3, when I really had to push, I made a mistake in the first run and I had a pretty average lap time in the second one. Now I pay the price of my mistake. After my crash, we've got a five places penalty for replacing the gearbox change. This obviously complicates our race even more. Tomorrow it's not going to be easy, but I think that we have a good car for the race."