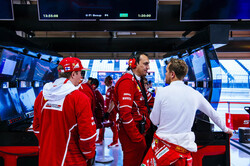 Speaking ahead of a race weekend that is absolutely crucial to his team and driver Sebastian Vettel's title hopes, Ferrari technical director Mattia Binotto has shed further light on the issues that plagued his team in Sepang, causing Kimi Raikkonen to not make the start and teammate Sebastian Vettel fail to post a time in Q1 the previous day.

"The problems we had were completely unexpected," he admitted, "there are problems that we did not experience both at the dyno or at the race track during the entire season.

"There were some quality issues with the parts," he continued. "We failed an inlet manifold of the engine, from the compressor to the cylinder heads, and it happened twice, because we had the same problem with Sebastian in qualifying and Kimi in the race.

"Obviously it happened twice in Malaysia, so certainly some boundary conditions have affected the overall reliability. This is something that we are analysing. Obviously in parallel we reinforce the components, but it's something which we still need to better understand."

Asked where he believes Ferrari stands in terms of the current pecking order, he replied: "I think qualifying is the best way, somehow, to evaluate it. We had the pole in Singapore, true, but we were not on pole in Malaysia. So I think we have progressed, we progressed through the season.

"Battling for the pole, or being on pole was more difficult at the start of the season compared to today. Overall our package has improved but it's never enough. Being fast is not sufficient. What counts is finally winning the race."