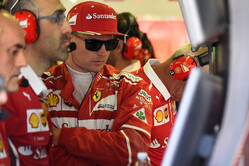 The Finn, who crashed out at the start in Singapore and failed to start the subsequent race in Malaysia, crashed out of this morning's practice session after carrying too much speed into Degner 2 and hitting the barriers.

His crew worked on the car throughout the break and subsequently decided to change his gearbox, thus incurring the penalty.