Nothing to see here, insists Vettel 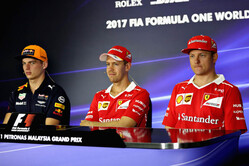 Anyone hoping for fireworks at today's press conference as Max Verstappen, Sebastian Vettel and Kimi Raikkonen lined up side-by-side for the first time since that ill-fated moment two weeks ago, will have been sorely disappointed.

Instead of finger pointing, mud-slinging and fisticuffs, the incident was dealt with politely and in a few moments, Verstappen even ending the press conference by promising his German rival some of his birthday cake... during qualifying on Saturday.

"I don't think there's much assessment necessary," said Vettel. "Obviously on Sunday all three of us were unhappy, but you move on."

"Not really anything (to add)," agreed Ferrari teammate Kimi Raikkonen. "Obviously we've moved on since Sunday, since the weekend."

"It happened, you know," added Verstappen. "You can't change it any more - it was just a very unfortunate moment. But there's nothing you can do about it, we just come here and we try again."

Asked how he dealt with the obvious frustration, Vettel admitted: "I think it would have been more difficult if I had lost the car somewhere in the race and it's obviously different but with a collision at the start like that, I think we all three after the race, that was when we had to go to the stewards.

"What can you do?" he continued. "The lights went off, obviously, we did our starts, everyone was trying to move at the start and it was the way it happened. It ended up really bad for all three of us and that was it. Obviously I could continue a little bit more, but the damage was so bad that I had to stop anyway. Not much you can do - I think it's part of racing. It's also not the first time I've been in a situation like this and probably it will not be the last time. Hopefully it won't happen again, but it's part of racing. It happened, there's not much you can do, and therefore not much point in trying to look at it again and again, I think it's much better if your time and energy is spent looking forward.

"Every start is different," he added, "and the way Singapore happened you can look at it again and again; it doesn't matter. First of all it's done, and second I think it was pretty unfortunate for all three of us so we want to move on.

"Having said that, I can't promise you now what will be on my mind on Sunday when I leave the grid, but normally I don't, I never thought about the last race, so I'm pretty sure I'll be focussed on seeing what I can do on that race start on Sunday."