Having kept fans waiting for two hours before finally deciding that conditions were safe enough to resume qualifying, one would have thought the sport would reward them by going all-out and putting on a show.

The drivers did their bit, and that final lap from Lewis Hamilton was the stuff of legend, not to mention the efforts of the Red Bull duo, Esteban Ocon and Lance Stroll.

Sadly, a glitch with the timing system meant that fans were finding it difficult to keep track.

For the last three races, the official F1 Timing App has adopted the practice of not re-setting the times at the end of Q1 and Q2.

Consequently, as the drivers post their times in each phase of the session, especially the climactic Q3, unless they go quicker than their time in the previous phase, it is the old time that is shown.

Sadly, this basic error made its way to the timing shown on TV screens at the weekend, when despite Ricciardo being shown as having gone quickest with a 1:36.841, Lewis Hamilton was shown third quickest at that stage having posted 1:34.660. While he was indeed third at that stage, the 1:34.660 was from Q2 and had absolutely nothing to do with Q3. 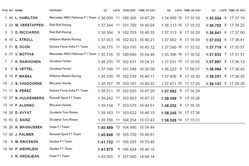 To add to fans' misery, possibly aware of the fact the information being shown was wrong, said powers that be removed the timing graphics from the TV screens before replacing them with the names only, thereby - after that two hour wait - leaving fans, commentators and possibly drivers utterly confused.

We say drivers, because at one stage Lewis Hamilton asked if he was too slow in the first sector, only to be told the delta time was wrong.

While the order shown - when it was shown - was correct - the times were not. Indeed, as can be seen in our screenshot (top right) at the end of Q3, only one driver's time is correct, the remaining nine show the best times from Q2.

The one driver (Ricciardo) whose time is correct is the only driver of the ten in Q3 to have posted a time in Q3 quicker than anything he posted in Q2 (or Q1) - as seen in the official timing release (lower right).

Whether the sport's new owners appreciate this or not, one doesn't know, but rather than those 'helpful' little graphics explaining the meaning of the various flags, fans would really appreciate up to date timing information that is correct... Formula One is a sport decided by one-thousandths of a second, fans need that info.

Oh, and going back to the 'flag graphics', to be told over and over what they, and the Virtual Safety Car, mean is akin to one of those annoying movies that ahead of each new scene insists on reminding you of the location… you know, the shot of Trafalgar Square or The Houses of Parliament with the caption "London, England" superimposed.

While the team behind the F1 Timing App insist that Saturday's issues were down to "trackside problems", the practice (since Hungary) of not re-setting the times after Q1 and Q2 is purely down to someone getting it wrong for the last three races.

Furthermore, "trackside problems" are not the reason that in the moments before FP1 in Belgium, for example, App users found themselves unable to access the timing system unless they confirmed their email address. Then when attempting to confirm said email address they were directed to a webpage that didn't exist.

Of course, seeing as the app only goes live 5 minutes before the start of each session, fans - or should we say customers as they are paying for this - are not aware of an issue until the cars head out on to the track and the screen is blocked by a 'confirm email' warning.

As Liberty and its various partners seek ever more fanciful ways to part fans from their money, it would be good if they could ensure that the services they are currently providing - and fans are paying for - work, and work reliably every time.

In other words, using the sport as a metaphor, fans are paying Mercedes prices but getting Honda reliability.