Wolff: Ferrari had a bad day 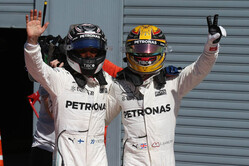 The only way in which Mercedes might have further rubbed its superiority into the nose of the prancing horse at Monza yesterday, was if Lewis Hamilton, a comfortable 36 seconds ahead of Sebastian Vettel, but only five ahead of his Stuttgart teammate, had slowed in order that the Silver Arrows might cross the line side-by-side.

It would have been an occasion, Bart Simpson style, in which one could spot the exact moment a million Italian hearts were broken.

As it is, Hamilton taking the world championship lead for the first time this season, and at a time Ferrari was celebrating the seventieth anniversary of its founding, was more than enough to crush the Italian team which appeared a pale shadow of the outfit that as recently as Hungary appeared to have serious title intentions.

Instead, Mercedes looked as mighty as it has ever done over the last three seasons, enough to suggest that perhaps the German team was merely playing with the opposition or that outside forces had somehow conspired to revive a series that was flagging under such domination.

Even as Ferrari president, Sergio Marchionne was admitting that his team screwed up, Toto Wolff was looking to adopt his default position of underdog, insisting that it was merely a "bad day" for his rivals.

"Emotions run high," he said of Marchionne's comment, "and when you have a bad day you can't hide it.

"For me, it looks like this weekend Ferrari has made a step back somehow," he continued, a masterpiece of understatement. "I think we were very solid but also they haven't performed in the way everyone expected. Red Bull starting from the back of the grid almost finished P3.

Despite appreciating his rival's pain, Wolff managed to put the boot in, confirming that both his drivers had turned their engines down early into the race.

"We were looking at the damage matrix within the engine and trying to find a sensible way of letting them race but equally not damaging the engine too much," he said. "But you could see that they were pushing quite a bit.

"Lewis ran wide in the second chicane so we are very well aware that towards the end of the season the mileage on the engine can be crucial, therefore we turned it down a bit."