Hamilton: Vettel doesn't want to be my teammate 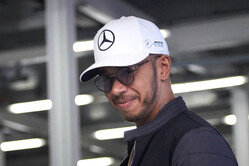 While Ferrari's decision to retain Kimi Raikkonen is seen as a means of appeasing Sebastian Vettel and thereby keeping the German on board, some still believe the four-time champ - who is out of contract at year end - could make a shock move to Mercedes, hence the delay in conforming Valtteri Bottas for another year.

However, speaking to reporters in Belgium, Lewis Hamilton dismissed talk of the German joining the Silver Arrows, claiming that Vettel wouldn't enjoy some of the advantages he enjoys at Maranello, such as being outright number one.

"I'm stating the obvious, but I know he doesn't want to be my teammate," said the Briton. "He wouldn't be in the position he is in now in terms of how the team operates if he was here.

"It's highly unlikely he'll be here," he added, with a grin. "But I am always game to race whoever it is and racing against the best drivers is always a great thing."

Having said from the outset that Bottas is the best teammate he has ever had, Hamilton insists there is no need to change the current line-up.

"I think the team is in a very, very good place," he said, "the last race is actually one of the best examples of how great the team is currently.

"Coming into this season I haven't changed a single thing that I do but there is a new element in the team and it works. So I don't believe any of the bosses or any individual at the team is unhappy with what is currently in place, so I find it unlikely they would change that."

This weekend marks the Briton's 200th Grand Prix, and despite the 14 point gap to Vettel, Hamilton insists he is more than up for the fight ahead.

"He's leading because he's been more consistent," he admitted. "I want to have more consistency than I have had so far this year.

"We know what is going on with our car and where it can be better," he continued. "We don't need to big it up or downplay it, we just have to do the job and we are here to deliver some very special performances over the next nine races.

"I thought about lots of things over the summer break, but one thing for sure is I am here for blood, I am here to win and I am here to stay. I have been racing so long, you would think your passion, your desire to win, would fade, but it is stronger than ever and that is exciting for me."