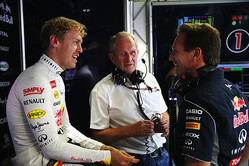 Helmut Marko, who oversaw Sebastian Vettel's four title wins with Red Bull between 2010 and 2013, believes the German will go on to claim a fifth crown this year.

The German, who lost ground following a disastrous Silverstone weekend, subsequently led his team to a convincing 1-2 in Hungary, thereby heading into the summer break with a 14 point advantage.

Marko, who oversees Red Bull and sister outfit Toro Rosso, and reports directly to Dietrich Mateschitz, believes the German will come back stronger after the break.

"I believe in Vettel, because I know his mental strength, and Ferrari has raised its game," he told the official F1 website.

"Silverstone, I would say, was an exception," he admitted, "Ferrari was clearly the stronger car in the first half of the season and only due to various circumstances could they not materialize all their chances."

Asked if that "mental strength" had ever led to run-ins, the Austrian, who is equally hard-nosed, insisted: "No, never. But what is fact is that we have been sixty points behind before the summer break and still won the title with him!

"Seb will use this summer break to come back even stronger. That's how I know him."

Red Bull secured Vettel's (F1) services following a wrangle with BMW, the German having made his debut with the team at Indianapolis as replacement for Robert Kubica following his crash in the 2007 Canadian Grand Prix. Ironically, almost a year earlier, the Pole made an equally unexpected debut when he was drafted in to replace an unwell Jacques Villeneuve in Hungary.

Asked, almost exactly ten years later about the prospect of Kubica returning to the sport, Marko was equally enthusiastic.

"Before his accident, Kubica was one of the quickest drivers of his time," he said. "On top of that he had a successful time with Renault, and if they think that they can continue with that then it makes sense for them. I think it would be nice for Kubica to come back."

Asked if his age might be a factor in terms of the Pole's return, especially at a time the sport appears to be looking to teenage talent, Marko said: "I think that Verstappen is the exception. Generally you have to look at the personality of a driver... there are some, like Verstappen, who are ready in their teens while others need more time. If Kubica still has what it takes, then why not?"