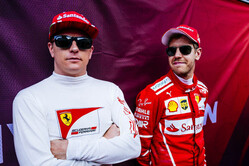 Though both drivers are out of contract at season end, comments made by Ferrari president Sergio Marchionne in Hungary suggest both drivers will be retained for a fourth season.

Despite Vettel's steering issues, which in turn led to a frustrating race for teammate Raikkonen, Marchionne was present to oversee his team's second 1-2 of the season.

Speaking after the race, the topic naturally turned to the Scuderia's plans for 2018.

"I think I have been public on the Sebastian issue," he said when asked about Vettel's future with the team, "if he wants to stay he is more than welcome to stay.

"In the case of Kimi, we are pretty well sure, we know he wants to stay," he added. "Hopefully we will bring them on soon."

Asked the chances of retaining the Finn, Marchionne having twice ordered him to pull his socks up this year, the Ferrari president said: "Probably better than 50 percent... we'll see."

Asked if the announcement will come at Monza, the Italian team's home race and where it traditionally makes such announcements, he said: "That's what I heard. I heard Maurizio was going to do that.

"I have no planned timing," he added, "it is early enough. This is the eleventh race out of twenty so we have a lot of races to go."

Speaking over the weekend, Vettel said there was no mad rush to agree a deal, and that he preferred to concentrate on the job in hand.

"It's true that I haven't got a contract yet but I think the primary objective at the moment is not to look at papers and worry about those things, I think it's to make sure that we get some good results.

"Obviously we have another race and another opportunity here before the summer break and then there is a bit more time."

Asked why - assuming he is staying with Ferrari - there is a delay in agreeing the deal, the German said: "As far delaying, I think the fact we are working hard, both from the team's point, my point, I think we have other things to do right now, so, as I said, in the summer there's a bit more time.

"There's a couple of weeks' stretch where there is no race but for now I think the focus is extremely high on working on the car. So, for me I'm obviously not designing the bits but trying to give as much feedback as I can, trying to spend time in the simulator, generally talking to the team. That, at the moment, has priority.

"As I said, a piece of paper can be signed fairly quickly so that's not a problem.

"I'm not in a rush," he insisted, "I don't think the team is in a rush, as far as I understood, I think I have a good contact to the team, I think they would tell me otherwise so, as I said, there's no problem, nothing wrong."