Scuderia Ferrari has renewed its contract with Kimi Raikkonen, thereby keeping him on board for the 2018 season..

The Finnish driver, who won the 2007 title with the Maranello outfit, has enjoyed two stints with the legendary team, from 2007 to 2009, and then rejoining in 2014.

Sebastian Vettel, whose contract runs out this season, has yet to agree a new contract though the Italian team has made it clear it wishes to retain him.

The decision to keep Raikkonen on board, which is what Vettel wanted, would appear to indicate that a new contract for the German is a matter of 'when' rather than 'if'. 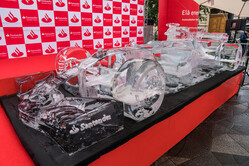 On the other hand, if Vettel does remain for 2018 it will be interesting to see if the German only agrees to a one-year deal.

Ferrari president, Sergio Marchionne, has twice this season told the Finn to 'pull his socks up', the Finn admitting to not having had the best of seasons.

Nonetheless, there have been some good moments, not least pole in Monaco, though the Finn subsequently lost out to teammate Vettel.

While the move will no doubt keep Vettel on board, it ends any hope of Antonio Giovinazzi or Charles Leclerc making the move up to the Maranello outfit's F1 team, though both are strongly linked with Sauber.

News of the Scuderia's full line-up will probably come at Monza.

"Scuderia Ferrari and I have agreed to the renewal and both parties are happy about it," said Raikkonen at a promotional event for Santander in Helsinki this afternoon.