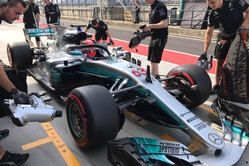 Ever since the FIA announced last month that the Halo device is to be introduced in 2018, drivers and fans alike have been divided.

While nobody wants to see drivers injured, or worse, many query not only the aesthetics of the device but whether it actually compromises the DNA of the pinnacle of single-seater racing, some concerned that it signals an eventual move to closed cockpits.

In a bid to make the device more acceptable, the FIA is now looking at ways the look of the device can be improved without compromising safety.

While media attention is very much focussed on Robert Kubica at the Hungaroring today, as the Pole makes his return to the track in a contemporary F1 car, a little further along the pitlane George Russel is running the Mercedes W08 with a revised version of the Halo.

"We feel that we have scope to reduce that thickness for the benefit of the drivers' forward vision," he continued. "So we will be testing before next year, going as low as 16mm, and see how much we can push it."

In a further bid to improve the aesthetics, the teams will be allowed to customise their devices next year in terms of fairings and aero tweaks.

Mekies further reveals that the teams will be allowed to run the devices over the course of race weekends in the second half of the season.

"We've told some teams that have asked that they can use them during P1 and P2," he said, "and during in-season tests.

"Not tyre tests," he added, "but for example the two-day test here, we said they could you them at this test, the test after Abu Dhabi, and in free practice sessions on the first day at any event, as most of them did last year."

Renault's Nick Chester has doubts as to whether the Halo can really serve an aero purpose, though he's happy to see it introduced for driver protection.

"It's good to have something there that's going to give the driver more protection and everyone's behind that and wants to put it on the car for that reason," he said. "But in terms of aero, if anything it's a detriment and, if anything, you have to work around it being fitted to the car. So, I don't think they'll be any huge tricks with it. I think everyone will just want to put it on the car and make it the best they can for the drivers."

Asked about fairings, Red Bull's Paul Monaghan said: "The fairings were agreed around about July 2016 or the extent of them.

"We will make use of the fairings to reduce the aerodynamic detriment of the halo and I think, beyond that, the aesthetics of it.

"If we can have a fairing which reduces some of the aerodynamic detriment and makes it, to the eye of the beholder, shall we say, slightly more aesthetic, we'll take that solution but I think the aesthetics of it, it's not put on there for that reason, is it? It's put on there as a safety device. We'll put the fairings on it, we'll do the work that Nick's talking about, to reduce the detriment and that will be on for 2018."

"We don't exactly know what opportunities we'll have," added Paddy Lowe, "but I believe we'll have the space to minimise the aerodynamic detriment as Nick was saying, and hope within that, generally, we try and find a good aesthetic and these things often go together."

"The fairings are allowed," concluded Chester, "it's a fairly small fairing and as Paddy has said, not all of the regulations for fairings are finalised yet. We'll be doing a little bit to reduce the aerodynamic deficit."

Check out our Wenesday gallery from Hungary, here.