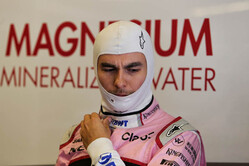 While Sergio Perez might not have been too concerned at the news McLaren is retaining the services of Stoffel Vandoorne, like several others he will have been disappointed to hear that Ferrari has chosen to stick with Kimi Raikkonen.

As a result, the Mexican is aware the most competitive drive available to him right now is the one he already has, at Force India, though a deal for next season has yet to be agreed.

Speaking to reporters at Spa-Francorchamps today, the Mexican insisted that negotiations are going well.

"It's quite close," he said. "Every deal I do involves my Mexican sponsors so right now they are in discussions. Hopefully soon we can be in a position to announce something.

"It won't take too long I think," he added. "Hopefully once we go into Asia my future will be secure. I'm in no hurry, I know I'm in a good position so I want to focus on extracting performance out of the car."

Asked about Ferrari's decision to retain Raikkonen, despite company president Sergio Marchionne giving the Finn a number of warnings to raise his game, Perez admitted: "I was expecting it."

With a number of driver contracts coming to an end this year, and even more at the end of 2018, some drivers are scared to commit to one team in case a better opportunity arise elsewhere, then there is the fact that in reality only two - perhaps three - are able to offer drivers the chance to fight for podiums and wins.

"It's always the same, if there is an opportunity in atop team it's very rare," said Perez. "But look at how Bottas ended up in Mercedes.

"While it's frustrating for me, it's the way the sport is at the moment," he admitted. "There is just one or two teams being able to compete for the top and then there is a big margin behind. If you are not in those two teams then it is very difficult."