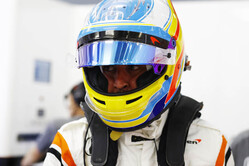 McLaren Honda earned its best qualifying positions of the season in Hungary this afternoon. Fernando Alonso and Stoffel Vandoorne will line up seventh and eighth respectively for tomorrow's 70-lap Hungarian Grand Prix.

Fernando celebrated his birthday today by equalling his best starting position of the year (he lined up seventh in Barcelona). In starting eighth, Stoffel also equals his previous best grid slot, achieved at the British Grand Prix earlier this month.

Fernando Alonso: "It's been a positive weekend so far for us as a team. We knew the top three teams would effectively be out of reach, so fighting for seventh and eighth was the maximum target we could aim for today. And, indeed, that's where we'll start tomorrow.

"There are no points to gain on Saturday, so hopefully we can convert those positions in the race and score some good points. They're very much needed by the team at the moment.

"In terms of race pace we should be okay. This is a circuit where it's difficult to overtake; the tyres are very stable and have low degradation so I think that, if we have a good start, we should have a good chance to maintain our positions - that's the target for tomorrow."

Stoffel Vandoorne: "We pretty much got everything out of the car today. We'd been looking strong all weekend, so it was good to get both cars in Q3 and to carry our pace through into qualifying.

"My car felt quite strong - it felt pretty good in the corners. I think we maximised the package we had today.

"But the race tomorrow is the most important thing: I hope we can get both cars into the points. Our pace has been inside the top 10 all the time so we're looking strong."

Eric Boullier: "We always knew that this was likely to be a strong track for us, so to line up seventh and eighth - effectively the 'best of the rest' underlines the inherent pace of our package.

"But I think what's more satisfying is that we've shown such consistent pace throughout the whole weekend. That gives us the confidence to believe that we can convert these starting positions into equally strong points-scoring places tomorrow.

"Both drivers have been extremely closely matched in every session, and there's a feeling that we're really pulling together as a cohesive team now. It's safe to say that we're all looking forward to an intense, fun and productive grand prix tomorrow."

Yusuke Hasegawa: "Today marked the best qualifying for McLaren Honda this season, with both cars into Q3, starting tomorrow's race just behind the top three teams. Although we knew this circuit would suit our car, it's still a positive step forward for us, and the team did a good job with our qualifying strategy.

"Fernando and Stoffel had a good impression of the car yesterday and the team utilised this morning's practice session by further working on the set-up ahead of qualifying. They both then drove incredibly well this afternoon to close up to the front-runners.

"Today's result is down to the drivers, improvements to our PU, and also the aero upgrades the team has brought here. Hopefully this will give everyone a boost before the summer break and before the second half of the season begins.

"We know there is still a performance gap, but we also think we're quite competitive here. Hopefully we'll have a chance to improve our positions in the race if we have a good start as overtaking is difficult here. We hope to get our best race of the season here in Hungary tomorrow."