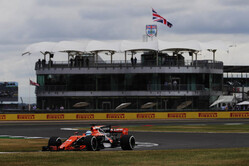 Already hit with a 5-place grid penalty after Honda elected to fit a new Energy Store to his car, Fernando Alonso has been handed further penalties that will consign him to the back of the grid.

Reverting to the Spec 3 unit he used for part of the weekend in both Azerbaijan and Austria, it initially appeared that the only penalty he would incur would be that for the new Energy Store.

However, Honda had warned that further changes might be necessary following Friday's opening practice sessions, and sure enough the Spaniard takes another 25-place hit after the Japanese manufacturer elected to essentially change his whole kit and kaboodle... Internal Combustion Engine (5 places), Turbocharger (10), MGU-H (5) and MGU-K (5).

The Spec 3 unit is the first stage of an upgrade on which Honda's future is said to be based, the Japanese manufacturer having set itself an October deadline by which time reliability and performance must have drastically improved.

However, strategy is also understood to be part of Honda's decision to make so many changes this weekend, the company feeling that the penalties will not be as damaging on a circuit like Silverstone as they would be in two weeks' time in Hungary.