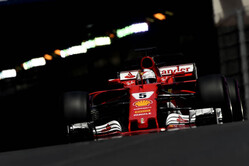 Ahead of today's sole practice session the air temperature is 24 degrees C, while the track temperature is 35 degrees. Once again it is bright and sunny.

Despite the countless laps Mercedes has run here over the years, the team admits to having taking a "wrong turn" for Thursday's second session, in terms of set-up.

Consequently, all eyes will be on the German team today to see whether FP2 was indeed a blip or whether F1 W08 EQ has more profound issues here, after all, there were fears the car's long wheelbase might compromise the team.

With Pirelli admitting that the ultrasoft tyres can last the entire race, Hamilton and Bottas need to be a lot closer to the front than 8th and 10th.

Impressive in both sessions was the Toro Rosso duo, 4th and 5th in FP2 and also very strong in the opening session, sticking to supersofts when everyone else was on the ultras.

As more drivers head out, most are on softs, though Wehrlein, Ericsson and Palmer have opted for the ultras. Strangely, no supersofts.

Seven minutes into the session the Bottas finally appears, the Finn, on ultras, immediately posting 15.249 to take the top spot. Perez, Kvyat, Ocon and Hamilton yet to appear.

Honda reveals that the turbocharger and MGU-H has been changed since Thursday and as a result Button takes a 15-place hit. Welcome back Jenson.

As Hamilton heads out, Bottas improves to 14.122, ahead of Hulkenberg and Palmer.

Raikkonen is on track, on the ultras, and immediately goes quickest in S1. However, moments later Bottas goes quicker in the same sector.

As Hamilton improves to 14.736 (5th), Raikkonen goes quickest in S1 but a mistake at Rascasse means he fails to improve.

As Ocon goes third and Perez fourth, Vettel heads out on a set of ultras.

As Vettel posts 14.090 to go fourth, Grosjean locks-up at Mirabeau and has to head down the escape road.

16 minutes in and all but Magnussen, Vandoorne, Ricciardo, Massa and Verstappen have posted times.

On his first flying lap, Kvyat posts a mighty impressive 13.791 to go fourth, only to be demoted when Hamilton posts 13.230.

However, the Briton isn't on top for long, moments later Raikkonen retakes the top spot with a 13.013 only for Vettel to bang in a 12.890.

Verstappen joins in the fun and games, taking fourth with a 13.262, the top six covered by 0.901s. Elsewhere a massive lock-up at Ste Devote for Ricciardo.

Ocon is unhappy at being blocked by Magnussen, who has slowed to a halt in front of the Frenchman to find some clear track - and rightly so - "that's Monaco mate," is the response from his engineer.

Finally getting a lap together, Ricciardo posts 13.830 to go eighth.

Another strong lap from Kvyat sees the Russian go fifth as teammate Sainz seeks to improve on ninth.

Despite his best efforts, Hulkenberg is unable to improve on 16th (14.977), the German one of many struggling with his tyres.