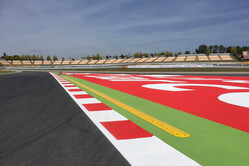 In view of the increased speeds following the 2017 regulation changes, not to mention the bid to prevent drivers exceeding track limits, a number of changes have been made at the Circuit de Catalunya ahead of this weekend's Spanish Grand Prix.

The artificial grass at the exit on the exit of Turns 10, 13 and 15 has been removed and 50mm-high kerbs have been installed.

The artificial grass has also been removed on the exit of turn 12, while the concrete area has been reduced in width and the gravel brought up to the concrete.

While the kerbs will be removed for MotoGP, a new chicane for MotoGP has been installed before the F1 chicane (Turns 14 and 15). According to the circuit, the apex kerbs are 25mm negative, and should not affect F1 cars.