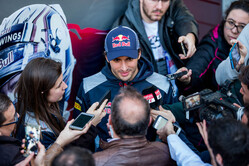 Toro Rosso driver Carlos Sainz has admitted that he finds it hard to take the FIA's claim of a 0.3s disparity between engines seriously.

Speaking ahead of the Sochi weekend, Charlie Whiting revealed that at the Strategy Group meeting earlier this week, the teams had been informed the result of the engine parity analysis.

This was a test agreed last year by which every single lap of every engine would be analysed after the opening three races and an Index of Performance would be created. This Index would then be used to 'map' a lap of the Barcelona circuit with the aim of having all the engines within 0.3s of one another.

Discounting Honda - which was 0.3 years adrift (allegedly) - Whiting claimed the Mercedes, Ferrari and Renault units were within the agree 0.3s., stressing that this applied to the engines and not to the chassis.

Naturally, Red Bull expressed disbelief at the findings, its drivers regularly over half-a-second off the pace.

Also critical of the FIA's report was Carlos Sainz, who admits to finding it difficult not to laugh at the claim.

"I saw news coming out this week about the FIA and that the top three engines are within three-tenths and I nearly put a comment on Twitter laughing at it," he told reporters

"And then Perez saying 'yes, it's true, it's true'. I nearly laughed at it. I think Max also nearly laughed," he added, referring to Sergio Perez' claim that Renault and Ferrari had caught up with Mercedes and that the German unit no longer had an advantage except over Honda.