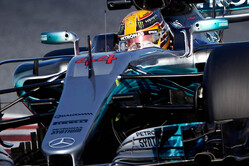 Though he admits to not sleeping on the night of the Australian Grand Prix, Lewis Hamilton says the prospect of going head-to-head with four-time champ Sebastian Vettel over the coming months fills him with excitement.

"My favourite form of racing is go-karting," he told reporters in Shanghai, "it's still hands-down the best form of racing because it's wheel-to-wheel all the way from start-to-finish, and that's what I grew up living for and I lived every day in Formula One in my life, waiting for the for those kind of battles.

"We had an amazing battle in 2014 with Nico Rosberg in Bahrain, I'm dying for that day to come again.

"I hope this happens with me and Sebastian because he's a four-time world champion," he continued, "one of the best of our generation, so I think the fans are sitting on the edges of their seats for that."

However, Vettel's win wasn't so much the result of a wheel-to-wheel battle, rather strategy and the inability, certainly on that particular track, to overtake under the new rules.

While we are told that overtaking will be possible at most circuits - Shanghai and Bahrain being good examples - there are fears that if this doesn't prove to be the case the title will be decided on strategy as opposed to out-and-out racing.

I just hope it's not a season of strategy," said the Briton. "I want to do some track stuff, that's what I live for, that's what drives me.

"Australia doesn't change the motivation, it just feels normal," he admitted. "We wanted to win, we wanted to be the ones at the front, and it makes you want to focus on all the weak spots more, and try to enhance them.

"I felt pretty good after the race, and it was afterwards thinking that you lost the race and it feels more painful but you just use that as positive energy, so you're training, focused on the next race, all I could think of.

"I couldn't sleep, all I could think of is to win the next race. So whilst some of it is negative, we turn it into positives and we move forward.