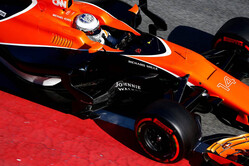 McLaren-Honda's progress on the final day of pre-season testing was hampered by a series of intermittent electrical issues. The problem caused the car to shut down, stopping Fernando out on track twice within a few short laps in the morning session. At this stage, it's unclear if it's the same issue that Stoffel encountered yesterday.

Overnight, the team changed a number of electrical components on both the PU and chassis, but the problem persisted. With every run in the morning session, the team changed further parts in an effort to eliminate as many variables as possible and identify the source. Over lunch, the team elected to undertake more significant and time-consuming changes in order to get the car back out on track in the afternoon.

Fernando returned to the track at 15:40 for a more productive stint until the track closed at 18:00. Despite an interrupted day of running, he still completed 43 laps consisting of aero, set-up and tyre tests. The team will now return to base to analyse the information gleaned from the test in order to push forward in preparation for Melbourne.

Fernando Alonso: "Today was a disappointing way to end the test, as we weren't able to make the most of the final day of running. The morning started positively and we were working well through our programme, until the car lost power in the corner and shut off, so I had to park it.

"We managed to fire up again without any problems, and everything ran smoothly for a few laps until it happened again, so we realised we needed to investigate deeper over the lunch break and make more changes. I'm pleased we were able to get going again in the afternoon – we wanted to use all the track time we could – as every single lap we do is useful for our learning.

"It's clear we have a lot of preparation ahead of us to be ready in time for Melbourne. I know the team is working hard and we'll be able to find more answers once we get the car back to the factory. I'm hopeful we'll be able to make the next step we need to be ready for Australia."

Eric Boullier: "Today was not the way we'd hoped to conclude the final day of pre-season testing. Yesterday's electrical issues persisted, prompting us to make regular changes to the car throughout the day in order to identify what has been causing the car to lose power intermittently.

"Although we've suffered a number of issues over the course of two weeks of testing, we've certainly learned a lot about the car, and we know the problems that need to be addressed. Plainly speaking, they aren't overnight fixes, but we're hopeful both McLaren and Honda will be able to make progress on them ahead of Australia in two short weeks.

"The guys and girls in the team have worked tirelessly and relentlessly to keep moving us forward day-by-day, and I'm incredibly proud and appreciative of the hard work and determination shown within the team. It's not been an easy testing period for us by any stretch, but we're as motivated as ever to turn it around and find the solutions we need to get us back on track and headed in the direction we need to go."

Yusuke Hasegawa: "The last day of testing became another tricky day for all of us in the team. It was unfortunate that we encountered the electrical issue again despite having replaced the parts under investigation overnight. This meant a significant amount of today's test was spent trying to identify what was causing the car to lose power. The result was a challenging day that forced us to veer off our run plan, but we managed to recover somewhat in the afternoon and complete some valuable sections of our test programme.

"The winter test as a whole has been tough for us, however, it's also true that the team has worked incredibly hard to make progress and I'm very thankful to each and every one of them. They have done McLaren-Honda proud.

"We still have some more time before Melbourne and we'll continue to work tirelessly with McLaren right up until we board the plane for Australia."