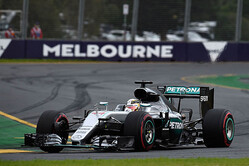 Before a single car has been unveiled, far less taken to the track, a failure by the teams to agree on an issue - now there's a surprise - means the season opener in Melbourne next month could be overshadowed by a technical row resulting in protests.

Late last year, Ferrari wrote to the FIA querying the hydraulic system being used by Mercedes (and others) aimed at improving its cars' stability under braking and in corners.

In a canny move, Ferrari suggested that before developing its own system, it wanted to check the legality of that used by a couple of other teams, most notably Mercedes, to ensure it was legal. The Italian team then suggested a number of reasons why it felt it might not be.

In response, Charlies Whiting told Ferrari, and thereby all the teams: "In our view any suspension system which was capable of altering the response of a cars' suspension system in the way you describe in paragraphs 1 and 2 would be likely to contravene article 3.15 of the F1 technical regulations."

Those paragraphs referred to be Whiting, referred to "displacement in a direction opposed to the applied load over some or all of its travel, regardless of the source of the stored energy used to achieve this" or "a means by which some of the energy recovered from the forces and displacements at the wheel can be stored for release at a later time to extend a spring seat or other parts of the suspension assembly whose movement is not defined by the principally vertical suspension travel of the two wheels."

Since the exchange of letters, a number of meetings have taken place and still the matter has not been resolved as the teams cannot find a solution they can all agree on.

Among the proposals put forward was a switch to active suspension, a return to conventional suspension or indeed no restriction, but still a consensus could not be agreed.

As a result, Charlie Whiting is hoping to issue a new directive before the opening test gets underway, which, if nothing else would allow teams to make the necessary alterations - should they be required - before Melbourne.

However, should the disagreements continue, and bearing in mind that Whiting's opinion is just that, an opinion and not the letter of the law, it is entirely possible the first race of the season could be marred by protests as Melbourne stewards are left to decide the matter. Counter-protests and appeals could then see the matter go before the FIA International Court of Appeal.

At a time budgets are very much in the headlines it's worth noting the money that will have been wasted if the systems are banned not to mention the added expense of teams changing their systems before Melbourne.