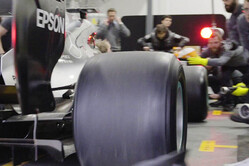 Days after the German team shared video of its 2017 power unit firing up for the first time, fans get to see the Brackley outfit carry out its first practice pit stops using the new, wider, heavier 2017 spec-Pirelli tyres.

On hand to witness these first practice pit stops at Brackley was the team's 'new boy' Valtteri Bottas, who will be hoping to score his maiden F1 win this year.