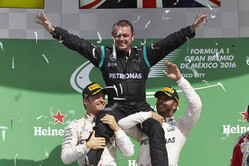 As far as Lewis Hamilton is concerned, perhaps the only thing that could make this afternoon any mare tense would be if he looked in his mirrors at the start to see Daniel Ricciardo and Max Verstappen still sporting their Dia de los Muertos make up.

Other than the concern he will naturally have regarding his start - the Briton finally getting it pitch perfect in Austin - he has his teammate, and championship rival, right alongside, and the two Red Bull drivers behind on their supersoft tyres.

Ricciardo will be aiming to repeat what he did at COTA and nail at least one Mercedes at the start, though, unlike Austin, his teammate is on the same strategy.

In America, Ricciardo's strategy was compromised by the Virtual Safety Car and that could the case again here, then again, good starts, or poor ones from the Mercedes drivers could see the Bulls take this race by the horns.

Fact is, Hamilton would be more than happy to see Ricciardo repeat his Austin start and, along with Verstappen, nail Rosberg at the start, thereby allowing the Briton the opportunity to close that all-important title gap. But should he fluff his getaway, as in Japan and countless occasions before, it could be game over.

As if this wasn't enough, we have the prospect of almost a hundred thousand Mexicans all hoping that whatever strategy the Mercedes and Red Bulls are on it all plays into the hands of Sergio Perez, who surely has to dig deep today following his nightmare performance in qualifying.

And having been there or thereabouts all weekend what happened to Ferrari when it really happened? At one point we were wondering if the Scuderia might finally be on the verge of taking its first win of the season only to see Sebastian and Kimi eclipsed by Nico Hulkenberg.

And if Perez needs to dig deep this afternoon to please the partisan crowd, what of countryman Esteban Gutierrez in the ever struggling Haas. Talking of whom, Romain Grosjean is to start from the pitlane after the team opted to change the floor on his car overnight.

Working through the grid, it's Mercedes versus Red Bull, with both teams going in different directions in terms of tyre strategy, a strategy that will make or break the race for those involved.

Other than making a clean getaway, Hamilton cannot afford to be involved in any squabbles, from the outset he must put daylight between himself and Rosberg. While the German can settle for second - and again in Abu Dhabi and Brazil - this is not how he wants to win the title, a title some already still insist on saying he lucked into.

Mad Max will be keen to get his feet further under the Red Bull table with another win, while Ricciardo would dearly love to follow up on his Malaysia win.

Following some of his previous nightmares, Hulkenberg will be glad just to get the first lap out of the way, the German sure to use his canny tyre management to his advantage. Though starting from twelfth, teammate Perez could yet give the crowd something to cheer about, though he has a difficult weekend ahead.

Ferrari will be glad to get the race out of the way and then the next two, hoping upon hope that 2017 is going to be better. Both drivers are desperate to do well, and giving all they can, but their equipment is not delivering.

As the epic battle for fourth continues, the Williams duo will be seeking to add another decent point haul to the kitty, if only for Sir Frank as he recovers from pneumonia. On Thursday, Bottas is expected to be confirmed at Grove for another season, what better way to prove to his team that it has made the right decision.

Kvyat's electrical issue means the Russian will not be involved in the battle with McLaren, at least in the early stages, leaving on-form Sainz to continue what is an increasingly tense midfield fight.

Behind them we have the ever struggling Renault's, Saubers, Haas' and Manors which, if nothing else, should keep us entertained as the frustrations of the drivers gradually get the better of them.

A number of these drivers have yet to secure seats for next season, and to add to their existing frustration the equipment at their disposal is hardly allowing them to put on the best show for prospective employers.

Without mentioning names, I recent years there have been a number of additions to the calendar, which, other than their contribution to CVC's coffers, have added little to the sport. Mexico is not one of them.

Mexico is one of those events, like Melbourne, Suzuka, Silverstone, Monza, Canada, Brazil and Austin where the fans are determined to have a good time and where the best of the sport is on show.

Let's hope the sport can deliver them something to really shout about today.

As for those all-important tyres, two stops look set to be the most likely scenario for most competitors, but with times closely matched there are a number of different strategy permutations on the table: which will depend also on the weather conditions, as in temperatures as opposed to rain.

Some drivers could aim for a single stop strategy, and while rapid track evolution continued to be a hallmark of the track yesterday, this will remain a factor this afternoon, again affecting strategies.

Much will depend however, on that long (900m / 0.497 miles) run to T1, the longest of the season. It is claimed that the supersofts could be worth between six and twelve metres over the slightly harder softs.

"It is 900 metres down to the first corner, so everything you usually see between the different compounds is exaggerated," Rob Smedley tells Motorsport.com. "So, depending on if you make a good start with a supersoft and your rival is at the lower end of the range with the soft - we see up to 12 metres, which is an easy pass. You are past cars before you get to the braking zone."

The pitlane opens and Hamilton is first out followed by Vettel and Magnussen. The Briton clearly can't wait to get on with it.

As the drivers gather for the national anthem, race officials warn there is a 20% chance of rain. Air temperature is 19 degrees C, and the track temperature is 47 degrees. It is bright, sunny and slightly warmer than we have become used to this weekend.

As they prepare to head off on the warm-up lap, Most are on softs bar Verstappen, Ricciardo, Hulkenberg, Bottas, Massa, Sainz and Palmer who are all on the supersofts. Nasr is on the medium rubber.

They head off, a few puffs of white smoke from Rosberg's car as Verstappen storms ahead.

In the Stadium, the crowd only really comes to life once Perez enters.

The grid forms, and as has been the case of late, it takes quite some time for the 21 drivers to get into position.

They're away, and Hamilton and Rosberg both make strong starts, as does Hulkenberg. The Briton maintains his lead as Rosberg and Verstappen are side by side heading towards T1. Lots of jostling for position throughout the rest of the field.

Hamilton locks up his right-front and runs wide and takes a detour across the grass as behind Verstappen and Rosberg appear to touch, the German also running slightly wide in the process. Further back Ericsson appears to spin and is hit by Wehrlein.

As they continue, Alonso gets out of shape and kicks up a cloud of dust as he almost loses it on the run to T5, the field still three or four cars a breast.

Ericsson is still going but clearly has an issue following that clash with Wehrlein, he locks-up.

Replay shows Rosberg getting a gentle kiss from Verstappen in T1. Meanwhile, another replay shows it was Gutierrez who set the Ericsson/Wehrlein incident in action, the Haas driver clipping the rear of the Manor.