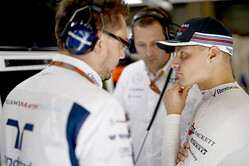 Valtteri Bottas qualified eighth and Felipe Massa ninth for the Mexican Grand Prix. Both cars easily advanced from Q1 to Q2 on a set of supersoft tyres. The team attempted to get both cars through to Q3 on a set of soft tyres, but switched strategy to complete Q2 on the supersoft tyre with both cars through in eighth and ninth respectively. In Q3, with the rising track temperatures reducing the grip levels, both cars were struggling to set their fastest laps of the day, and crossed the chequered flag once again in eighth and ninth on the supersoft tyre.

Rob Smedley, Head of Performance Engineering: We tried to see if we could get through on an option tyre in Q2, knowing that we had a reasonable margin to get through, but it became clear that this wasn't the case so we put on supersoft tyres which got us through reasonably comfortably. It was then a case of maximising Q3. We did a warm up lap followed by a flying lap to start, but on the second run we tried a different strategy pushing on our first timed lap. We lost a little bit of time at the start of the lap and then found a bit of time at the end. In the end, the lap times were very similar and I think that is the most we could have got out of the cars. Both drivers were happy with the balance, but there was just a general lack of grip out there this afternoon compared to this morning's session. Importantly, we have put ourselves in a reasonable position for the race which is key for our championship hopes, so we need to push on and make the most of it.

Valtteri Bottas: It was a very good qualifying session and we finished more or less where we should have done today. It was a shame we couldn't get through with the option tyre because now we're starting the race on supersofts. We just really need to try and be clever with our strategy because there's a big difference between the supersoft, soft and the medium tyre on this track in terms of tyre life. We need to make sure we get everything right tomorrow. It's a good starting point for the race. We've split the Force India's, so the main thing is we try and be ahead of both of them. We can beat them.

Felipe Massa: That was a very difficult qualifying session. I was struggling to make the tyres work. We tried on the preparation lap, and again on the first lap. We tried everything, but I just couldn't make them work. My best lap time was actually this morning when I had more fuel and less deployment on the engine. Then, with everything set up in the perfect way for qualifying, unfortunately I couldn't get a better lap time. Despite that, we are in the top ten. We know that the race tomorrow will be difficult, but we need to concentrate on scoring more points than Force India.