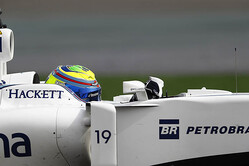 Felipe Massa finished seventh and Valtteri Bottas 16th in the United States Grand Prix. Felipe had an excellent start, gaining two positons at the first corner and was running P6. However, a virtual safety car was deployed due to Verstappen's retirement allowing Sainz an advantage to move ahead into P5. In the final stint, in a battle for P5, Felipe and Alonso came together to Felipe's detriment, dropping him to seventh and causing puncture which resulted in a penultimate lap pitstop. Felipe was able to maintain track positon and finish the race in seventh, ahead of Perez.

At turn one, Valtteri suffered a puncture following a collision with Hulkenberg, forcing him to pit on the first lap. His battle was then at the back of the grid for P15 with Nasr, which he led until the closing stages of the race when Nasr was able to get ahead. The team stays fifth in the Constructors' Championship, closing the gap to Force India to eight points.

Rob Smedley, Head of Performance Engineering: The key factor today was that Valtteri was out of the race effectively from the first corner after having to limp back to the pits with a puncture after an incident with Hulkenberg. After that, we just tried to concentrate on Felipe. He had got himself into a good position and we created a decent gap to Sainz in the first stint. We then had a good pitstop and strategy, and kept a good gap to Sainz on the option tyre, so we were in control of our race. However, the virtual safety car caused by Verstappen put us at a disadvantage and allowed Sainz to get ahead. We were then just waiting for his tyres to degrade when Alonso caught up, and collided with Felipe as he tried to get through. The car could have secured fifth today but circumstances went against us. However, we will be back in seven days' time and will continue to close the gap to Force India in the championship.

Felipe Massa: I had a really good start and the race was going fantastically. I avoided the incidents at corner one and managed to overtake two cars. Our pace was really good and I managed to open up the gap to the cars behind. Then I was really unlucky with the virtual safety car because I was nine seconds ahead and then Sainz came out in front of me, gaining a lot of time and points. At the end, Fernando dived into the corner I was taking, hit my car and I got a puncture because of it. It destroyed every opportunity I had to finish the race in sixth, and potentially fifth. We still finished seventh and closed the gap to Force India, but it should have been more. It's time to look ahead to Mexico.

Valtteri Bottas: It was a very disappointing day today. I went into turn one on the inside and had a good line for the corner, but at the apex Hulkenberg touched me and I got a puncture. That also damaged the floor of the car and I lost a lot of downforce for the rest of the race. I'm happy there is another race coming quickly next week in Mexico to try and make up for this. The positive thing is that we narrowed the gap to Force India a bit, but we need to make sure that we score good points with both cars.