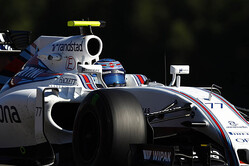 Valtteri Bottas qualified 11th and Felipe Massa 12th for the Japanese Grand Prix. Both cars progressed from Q1 into Q2 after two runs on the soft tyre, with Valtteri advancing in P5 and Felipe making it through in P10 after their second runs.

Valtteri and Felipe only had one run in Q2 on the soft tyre. Both of their laptimes were provisionally good enough to progress to Q3 but as others followed them across the line on an improving track, Valtteri and Felipe fell to P11 and P12.

Rob Smedley, Head of Performance Engineering: It's disappointing to be 11th and 12th and not make it through to Q3. However, what we can see is that our drivers are evenly matched and we've got most of what we could have out of today. The car just wasn't quick enough. It's going to be more about the race around here and we can definitely have a good strategy from where we are. We've got the car set up with a good compromise for all conditions, so whatever the weather brings we will be prepared. We've got to look forward now and get as many points as we can tomorrow.

Valtteri Bottas: Looking at our qualifying performance here from the past few years it's disappointing not to be in Q3. We just weren't quick enough today. I had a little bit of traffic in Q2, but the speed just wasn't there. The positive thing from today is that we have a free choice of tyres for the race. We have the same opportunity that we had in Malaysia to do something different with the strategy, hopefully we can make good use of that.

Felipe Massa: That wasn't the qualifying we expected. I think the biggest surprise were the laptimes from Haas. They qualified in front of both us and Force India in Q2. We are one tenth slower than the Force Indias, like we were in Malaysia, but I'm surprised by Haas. It's true that our laptimes on the new tyres wasn't so great, so I'm a bit disappointed with that. The race tomorrow will be tough. It will be a very big fight. But we'll try everything we can to have a strong race and hopefully score some good points. All we can do is try.